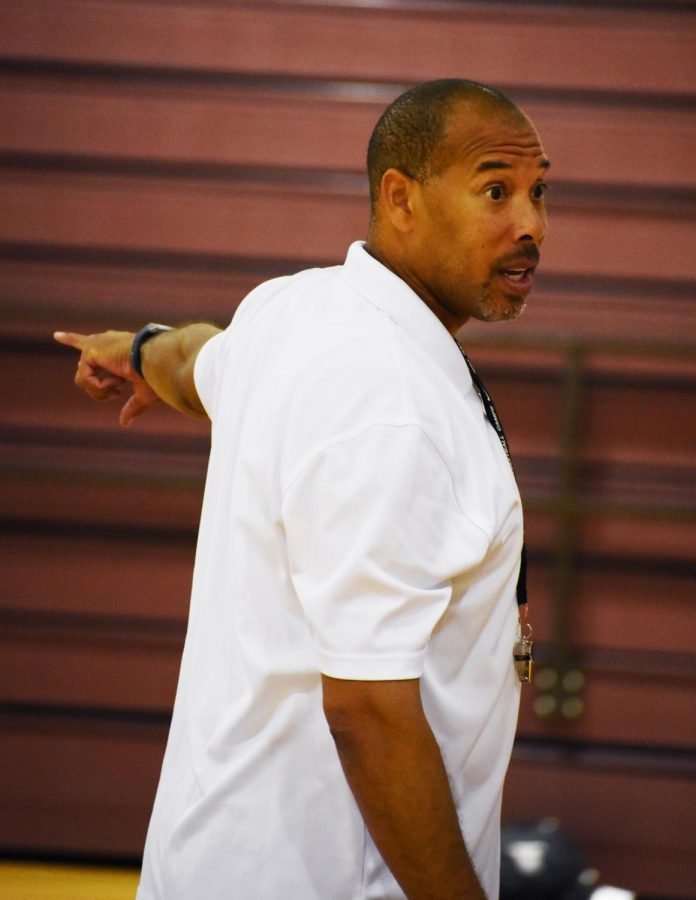 Coach Mike Allen talking to the players about a exercise to his team during practice on Oct. 30 at De Anza College.

Son of a single mother and consistently frustrated about his father’s disappearance, Mike Allen, 45, coach for De Anza College’s women’s basketball team, inspires his students to achieve their goals.

Born in Cincinnati, Ohio Allen’s mother always gave him the confidence to strive and work hard.

“My mom was an amazing mother,” Allen said. “She worked hard and she instilled in me the values and faith that I can accomplish anything, whatever that may be.”

In his middle school and high school years, Allen played baseball and football casually and never knew what he truly wanted to do in the future. He was drafted into basketball and after being taunted by his coach multiple times, he challenged himself to work even harder.

Being called the “20 20” player,Meaning when the team is up by 20 or down by 20 is when he would get playing time on the basketball court. Allen used this to push himself to the absolute limit.

Allen’s coaching career after his college coach told him he saw Allen as a leader. As a result, Allen began envisioning himself as a coach and began coaching at Castilleja High School and The King’s Academy. After coaching at Gunderson High School for eight years, Allen transferred to De Anza College.

“If I’ve got the equipment for them to train with, and I’m the one teaching them, there’s no way that they’ll fail,” he said. Allen’s main message to his students is that, “hard work brings change; you just have to try.”

Doryn Gomez, 19 a psychology major who plays for the women’s basketball team, claims said, “I look up to him because he has a moral conduct. He knows what’s right for us because he’s passionate and understanding about what he does.”

Sophia Rodriquez, 20, political science major, said, “He doesn’t yell like every other coach. Coach Allen is inspirational, motivational and he sees the best in everyone. It’s something that all other coaches lack.”

Allen has created a website that serves as an outside sports organization responsible for hosting basketball training sessions, camps and leagues.

“My website is used to inspire others,” he said.

“I encourage other students to sign up for my training programs, and if you can’t afford it, I will make it affordable.”