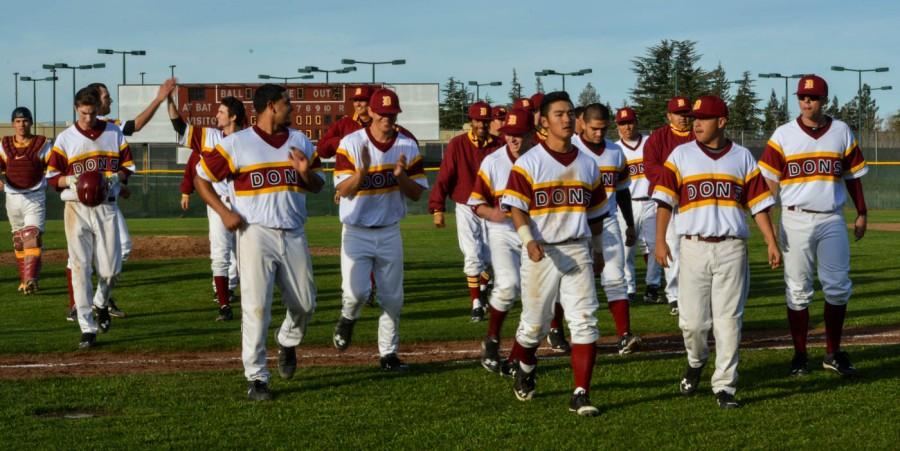 The De Anza baseball team took their second win of the season against Contra Costa College in dramatic fashion this Tuesday Feb. 10. Starting pitcher Alex Zarate went six innings allowing no runs and only one hit with many opportunities coming throughout the entire game for the Dons and Comets.

In the first inning Joey Shimono was able to get on base only to be tagged out seconds later with the score remaining 0-0. Entering the second, Zarate gave up a walk followed by a single letting shortstop TJ Conroy make a play in time to tag the runner out helping De Anza escape the inning. The fourth inning remained scoreless, as a fly ball was hit into center field allowing Ryan Johnson to dive, saving the Dons from a potential 1-0 deficit.

With the score remaining 0-0, Alex Martinez came in for Zarate to close out the game. Allowing only two hits through six innings, the Dons struggled to find a way to take the lead, playing more defensively with catcher Danny Molinari throwing a runner out at second making it a quick three outs.

As De Anza took the plate in the seventh with Issiah Todd-Fitzhue at bat, he managed to get on base with a single giving hope to the Dons late in the game. Errors on the Comets let Todd-Fitzhue run all the way to third, with a strikeout ending the seventh tied at 0-0.

Through the eighth and the ninth the Dons were able to get a quick three outs. The momentum shifted in the Dons favor as the hopes of winning the game in the last inning increased. A single advanced a batter to first base, followed by an error giving Johnson the oppurtunity to make it to third.

Alex Martinez came up to bat and was given an intentional walk, putting a man on base. No outs and two runners on base, De Anza had high expectations of winning with first-baseman Justin Edgar coming up to bat.

Edgar hit a ground ball which resulted in an error which brought Johnson home to win the game in the bottom of the ninth 1-0. “I feel good, A win is always something to be excited about.” Johnson said.