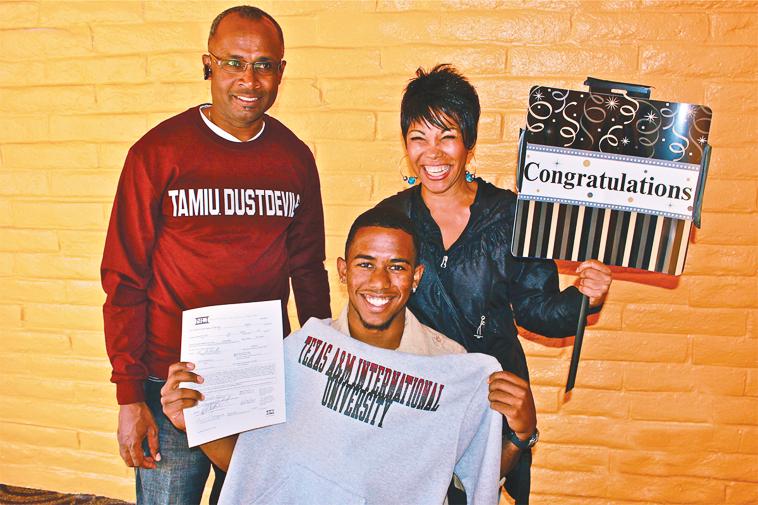 “When I saw him the first time, I thought he was the best player on the team. I knew he could play at [the collegiate] level,” Damjanovic said. “I never recruited a kid as heavily as him.”

On the verge of leaving Santa Teresa High School, Copeland had two basketball scholarship offers, one from UC Santa Cruz and the other from Bethany University.

Copeland signed with Bethany but because of investment issues, Bethany shut down and Copeland became a free agent.

After visiting the local junior colleges, Copeland decided to “stay loyal to coach JD” and join the Dons.

“He (Damjanovic) always told me if I don’t go to a four-year right out of high school then he wanted me to come play for him,” Copeland said. “He made sure to attend every eighth grade game, every game in high school; we really kept [a] good relationship.”

Copeland, standing in at 5 feet, 10 inches,  said his dream was to play basketball and he was willing to go wherever he could to keep pursuing
that dream.

Instead of choosing a four-year  university and trying to “walk onto a team,” he came to De Anza to keep playing and hopefully obtain a scholarship, which he  eventually achieved.

While playing basketball at De Anza   for his first two years, Copeland  not only has become a stronger shooter,  but has also risen as a leader.

“He brings a lot of dimensions to the team as a leader,” Damjanovic said. “He’s a coach on the floor. He leads by his words but also by his actions
at practice.”

After visiting and talking with several basketball coaches, Copeland decided to sign the letter of intent with the Texas A&M Dustdevils.

A coincidental fact that ended up being a huge game changer in the eight choices was that the head coach at Texas A&M, Bryan Weakly, was the former coach at Bethany.

Copeland said since the start of the recruitment process, he and Weakly talked nearly every other day, building a relationship identical to what he and Damjanovic had, a father-son relationship.

Despite wanting to grow, Copeland said his biggest fear is anything happening to his mother, who has been the driving force
behind Copeland.

“She has been a part of this whole journey,” Copeland said.  “She’s taken the initiative on herself just to make sure that everything with me and basketball is OK.

Copeland was introduced to basketball in the second grade.

Living in Milpitas, he played soccer until he moved to a new school in San Jose and stepped foot onto a basketball court.

“Ever since then, I felt it as a challenge,” Copeland said.

Because he was not good at it, he said he wanted to be the best at basketball.

Copeland, majoring in business administration, said basketball means the world to him because it represents the things he has overcome.

“A lot of people didn’t think that I could play college basketball because of my height. I was too short or I was too skinny or whatnot,” said Copeland.

“Just to play at a higher level, and to go play in the NCAA is truly an honor.”

In five years, Copeland said, he wants to be playing basketball overseas.

In 10 years, he said he envisions himself living in San Diego, in a white house with a red door, blue shutters, surrounded by a white picket fence, with his wife and three kids.

Copeland said he would like to thank the De Anza basketball coaching staff.

Whether it was instilling defense, performing at a higher level, or simply being there for inspiration, Copeland said every member of the staff helped develop him as a better individual.