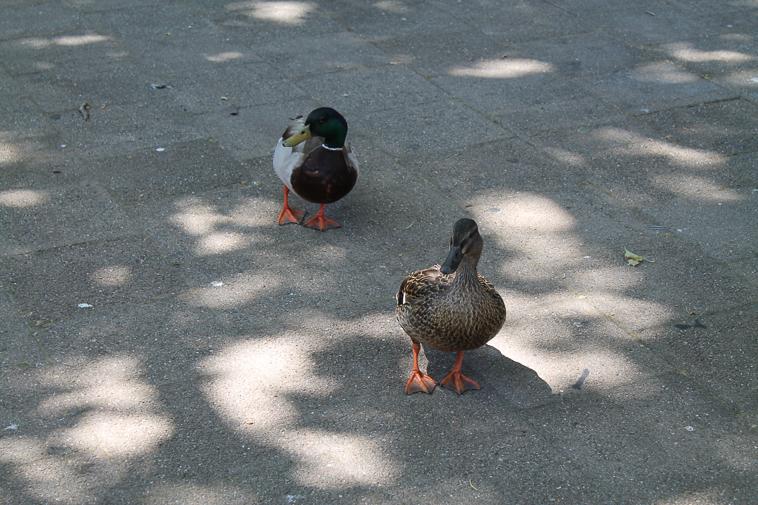 Mr. and Mrs. Duck have become the unofficial mascot of De Anza, drawing fans with their presence around campus.
DeeAnne Luna, Staff Writer

Members of De Anza College’s Physical Education Department are wary of a mascot change, which eould increase expenses for everything from uniforms, to the design on the gym floor.

“We don’t have the budget to make changes,” said Coleen Lee-Wheat, Dean of Physical Education.

Lee-Wheat said the coaches are grateful for all that DASB Senate has done for its athletes such as helping with traveling expenses when they have
away games.

But she said she hopes money can be spent elsewhere rather than changing the mascot and colors of the
new equipment.

Athletics Director Kulwant Singh said the idea of changing De Anza’s mascot has been brought to the attention of the coaches multiple times in the past
10 years.

“I’m not really for or against changing our mascot, but there should be a good reason as to why we should change it,” said Singh.

Changing the mascot would mean having to change all school equipment colors like the colors, on the pool lanes, the new score board and the new track which are all maroon and gold.

Singh said many coaches are against the idea of the change because they don’t see a need for it and have been stuck on this idea for a long time.

“No one wants the money to be wasted on a mascot change when it can go towards other aspects of PE,” he said.

But DASB senators have said this change would not occur automatically, if implemented.

“If there is change, it will not be all at once but gradually over the years,” said DASB chair of marketing Tatyana Grinenko.

Grinenko said students want the mascot changed to ducks because they find ducks more relatable to them and are a constant presence on campus during late winter and all of spring quarter.

Grinenko said students told her theyfeel that the mascot “Dons” brings up a negative connation with historical events that took plave when Europeans first came to the Americas.

Lee-Wheat said the  De Anza PE department said it feels a mascot change at this time is impractical given its current budget.

“If we were in better economic times, we would be more than happy to change the mascot,” said Lee-Wheat.