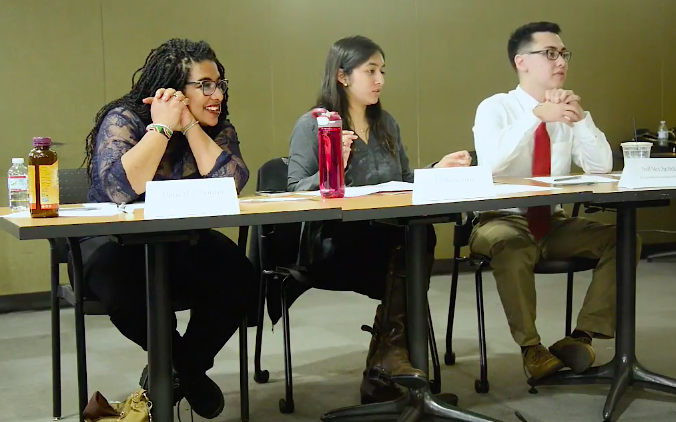 Yane An and Neil McClintick

The purpose of this editorial is not to discourage students from voting; La Voz strongly believes in the necessity of engaging students on campus and boosting turnout.

The Feb. 23 DASB Senate presidential debate hosted by De Anza’s Political Revolution club was a success in terms of revealing how unprepared the presidential candidates are. Answers were abstract and vague, demonstrating a clear lack of preparedness that will likely affect their ability to perform as senators — let alone president.

Fortunately, deficiency of knowledge can always be made up for by authentic devotion to the role, which each candidate should be willing to provide. Attending a student-run debate to represent oneself is a positive first step.

The greatest disappointment was candidate Dylan Kim, in that he consciously chose not to attend the debate at all. Candidate Kim told host Neil McClintick he did not attend because he felt the debate was a “waste of time.”

His campaign hinges upon two priorities: one, to subsidize school lunches; two, to add more seats to classrooms. While they may be valid concerns, the former cannnot be accomplished without cutting virtually every program DASB funds. According to Patrick Gannon, director of the campus center and food services, Kim’s plan would consume at least a million of the student government’s $1.2 million budget. In other words, to fund his project, programs such as the tutoring center, the Office of Equity, LEAD and HEFAS would have to be cut.

Additionally, science classrooms are legally limited in terms of chair quantities due to safety hazards.

Besides the impracticality of such implementations, neither of these issues are prioritized by the student body, as demonstrated by the results of a student survey of concerns the Political Revolution club sent out.

The candidates’ general lack of campaign readiness also showed in their indefinite plans to address the most popular general student concerns. Disappointingly, most candidates’ answers were surface-level, only generally acknowledging that yes, there were concerns, and yes, communication must begin or be improved.

Here are their responses to how they’re going to improve library access as an example.

“I think this last quarter, one of our senators, Holly, she’s worked on that and getting the library hours extended for all of our students because all of our students need to study,” candidate Carlos Duran said. “I will continue to talk with her and see what she specifically did, because I think it’s really important to extend our hours.”

Candidate Cialysiah Washington said, “With extending library hours, I’m really trying to work with Jim, or James Nguyen, on figuring out a way to make that more extend[ed] so that it really does include students who are here on campus that are here during night. I think that’s really important.” While Nguyen is vice-president of the academic senate, his role in extending library hours is relatively uncertain, since the faculty-based body primarily deals with curriculum and degree programs.

Candidate Rhozhen Panahi said, “I know people who work in the library and we can develop a way to or make a plan to make library hours longer, because [for] a lot of students, their only quiet place is the library and we definitely need to make sure every student is allowed to access it and be able to get what they need done.”

Put on the spot, they promised to begin communications but clearly had not researched the actual steps necessary to achieve their goals coming into the debate. This was the general pattern in addressing student concerns.

In their defense, it can be difficult to give in-depth answers when it comes to community development and Senate outreach, especially considering Washington and Panahi are newer De Anza students with virtually no senate experience.

Yet, they must start communicating with the student body the way they say they want to and figure out how to address issues if they really think they’re of importance. Taking these initiatives can and should begin before taking on a government position. How do we know they won’t drop issues entirely once they realize how difficult it is to follow through on their baseless promises?

Fortunately, candidates occasionally proposed more concrete measures to address those concerns, like Panahi’s goal of placing security cameras in the Flint parking lot, Washington’s idea to improve student-Senate relations by making the Senate room a place for students to hang out, and Duran’s plan to advertise events through classroom presentations.

Ignorance can always be forgiven as long as candidates show that they are sincere in improving and growing their knowledge. The most important requirement to best serve as president is a genuine, passionate commitment to learning more about the students at De Anza who need support from our student government.

For example, Panahi admitted she didn’t know much about the undocumented student population. Her honesty is appreciated, and hopefully what she takes away is that there is a critical gap in her understanding of the needs of our campus. It would be unacceptable to have a president who doesn’t know how to serve our undocumented students, especially in this political climate.

Another more positive and equally crucial takeaway from this event is the affirmation that De Anza students are capable of organizing and coming together on a large political scale, proof being the one hundred plus students who attended the debate. With next to no administrative or school support, DAPR was able to organize for and publicize DASB elections to a far greater degree than even DASB itself.

We’d also like to emphasize again that Kim was not even present. If he only accomplishes the bare minimum to run, and thinks participating in student-led debate is a waste of time, he is surely incapable of representing and serving our student body to the fullest extent.

Another unfortunate aspect worth mentioning is the high turnover rates of student government, which can cripple its effectiveness. Candidates, like Washington and Panahi, often lack the experience necessary to understand and navigate the complexities and institutions of De Anza. It is crucial they quickly become stronger speakers and capable figureheads to actualize their promised campaigns.

All candidates may seem qualified to take the position, but students should vote for whoever can best navigate De Anza’s bureaucratic tangle that is student government to make any lasting and effective change.

Our expectations are high, but fair if we want to see any actual change occur. Good luck to all the candidates.