Dem enter, not #demexit: The young left must infiltrate, not reject, the Democratic Party3 min read 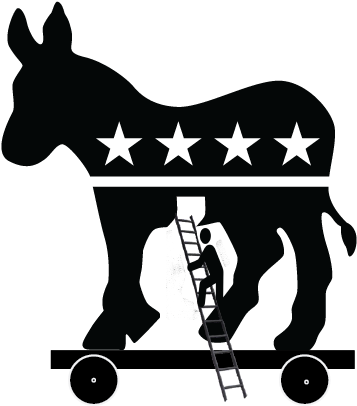 The Democratic Party’s donkey is a beyond senile, one-legged donkey with several incurable, fatal diseases. Yet, the pro-Sanders left, after being overruled by the party elite, loses little sleep as the blue continuously dims. While much of the youth now collectively rejects party politics, the collapse of the Democratic Party’s aged brand of neoliberalism has created a unique rift — an opportunity — for the people’s left to seize the future of the party’s soul.

When I walked into my first Democratic Party meeting, my initial observation was that the average age must have been over 50, so when my small coalition of college students begged the party to respect the youth, the future of the party, we were met with a disrespectful tone: “Maybe we would care more if they actually voted.” Fortunately, a few weeks ago, the pro-Sanders left, eager to change the status quo, showed up in waves all across the California Democratic Party’s Assembly District Election Meetings.

I witnessed incredible history being made in San Jose’s District 28 caucus as a candidate slate entirely crafted by disgruntled, political outsiders competed and won against a slate endorsed by every level of the local party. I watched as community activists in casual jeans took on the well connected and uninspiring candidates of expensive suits and meaningless rhetoric. All the while, these activists were cheered on by an army of disruptive young progressives carrying around slates probably made on Microsoft Word 2004. Across the many caucuses in California, Sanders Democrats claimed a majority of the delegate seats — 650 of the 1,120 available seats and now have a serious shot at changing the state party’s platform and selecting the state party chair.

The success of this grassroots movement will require the youth of America, the only bloc which is comfortable with the word “socialism,” to take up figurative arms and develop a serious stake in the future of the party.

I am not calling upon the apathetic youth to suddenly declare themselves proud Democrats and to suddenly applaud the party’s moderate tone toward Wall Street, Israel, and universal healthcare, but we must be willing to join and participate in party politics in order to substantially change the country’s tone on such issues.

The immediacy of this movement must not be underestimated, as it will require the party to be reclaimed from the bottom-up; the left cannot simply anticipate the 2020 candidacy of a younger Bernie Sanders. The youth must be prepared to infiltrate, and perhaps its most significant test will be the 2018 midterms. Reclaiming the party will require young, far-left involvement to prevent a repeat of the 2014 midterms, whereby youth turnout fell to a 40-year historic trough of 19 percent.

Visualize the current Democratic Party as a seesaw; it must choose to either represent grassroots democracy or wealthy cocktail parties. During this identity crisis, whichever way it tilts will be entirely dependent upon how truly determined the youth are in reforming the only viable, somewhat left-wing party in America.

Within every movement for social and economic justice lies a commitment to inside and outside power. The African-American civil rights movement personifies this duality; while powerful demonstrations such as student-led sit-ins no doubt shifted the public narrative, the ultimate amalgamation of these efforts was realized through critical pieces of legislation. The daily anti-Trump protests demonstrate that the progressive youth is ready to berate the system, but they must be equally ready to accept the need for inside power only achievable by having trustworthy friends in positions of power.