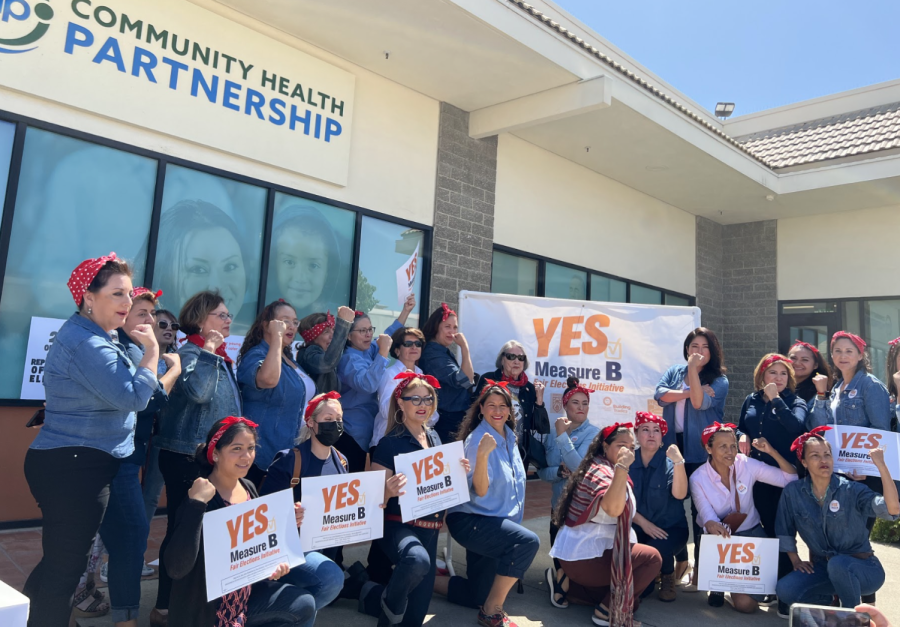 At a rally on May 17, members of a Latinx coalition dress up as ‘Rosie the Riveter’ and held signs in support of Measure B.

150—that’s right, 150% more . That’s how many more voters aged 18 to 24 voted, on average, in the last several presidential year elections in San Jose compared to midterm elections—i.e., when ballots do not include a vote for President. It is time to stop electing San Jose’s mayor during midterm elections, when young voters proportionally have the least say. Young voters—and really all voters—should vote for Measure B this June 7 election because we deserve a fair shot in the electoral process; our futures are ultimately at stake, whether it be climate change doomerism, crippling student debt, or affordable housing for students and young professionals.

For decades, students and faculty at De Anza have led mass mobilization campaigns to encourage more college-aged voter participation. No doubt, this work will still have to continue, just like it has years after I graduated from the College in 2017. But it is not enough to just tell young people they should vote; we must also make the process more accessible and palpable to our college-aged stakeholders of democracy.

As a professional community organizer, I encourage all residents of San Jose to support Measure B—which will be transformative. If passed, the Measure will move the mayor’s race to presidential years, where  we know turnout is roughly double that of midterms. The effect is especially profound for voters age 24 and under because so few Gen Z and Millenials vote during off years.

It is easy to blame us for our lack of participation, but people tend to become more civically activated once they own property—and it has become increasingly difficult to own property as a young person.

As a political campaigns manager, let me explain why supporting Measure B will profoundly reshape San Jose’s mayoral elections for young people.

The first reason is simple–we want more people to vote, especially for deciding our most powerful positions. Across the country, many states and localities are moving backward; using restrictive voter ID laws, residency requirements, and limited polling location, with the effect of dramatically suppressing young voters’ share of the electorate.

The second reason deals with political realities: why would any mayoral candidate prioritize you in their platform, outreach strategy, or even governance (once elected) if your age bracket is not likely to vote?

Campaigns for local candidates will continue to follow the same blueprint unless Measure B is passed—prioritize talking to older voters and property owners because it is historically the best bang for your buck.

Measure B would require all mayoral candidates to make a serious attempt to court younger voters, fundamentally reshaping how all future mayors will likely campaign and govern. And young voters are generally much more progressive. They think differently and receive messages and advertisements differently.

As a young voter and former De Anza student, I am excited to cast my vote for Measure B—to create a San Jose and South Bay that truly cares about the needs of people in my generation. Our voice, our vote.

Vote yes on Measure B

Neil Park-McClintick is the San Jose Measure B Campaign Manager. He is a full time organizer with Silicon Valley Rising Action and a former Opinion Editor for La Voz at De Anza College.