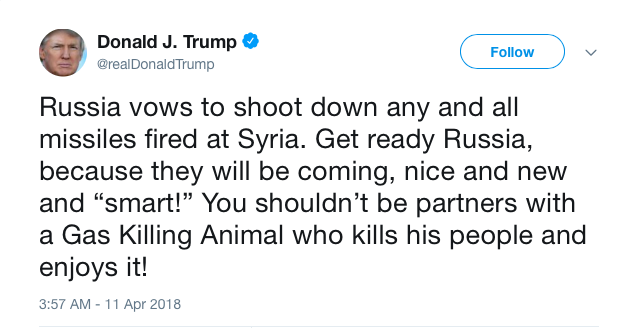 While President Donald Trump’s social media presence is informative, he should not use Twitter to command our military.

Trump has used Twitter to announce the “fake news awards;” to promote his favorite Fox News shows like “Justice with Judge Jeanine” and “Fox and Friends” and to announce military strikes in Syria.

Pronouncing military strategy in the same manner as his demagoguery diminishes the importance of such an announcement.

In a speech about military strategy last August, Trump promised not to disclose future military action, saying “we will not talk about numbers of troops or our plans for further military activities.”

On April 11, Trump broke his promise, tweeting “Russia vows to shoot down any and all missiles fired at Syria. Get ready Russia, because they will be coming, nice and new and ‘smart!’”

Trump often ditches traditional press conferences in favor of Twitter, throwing out the opportunity for the media to ask questions on behalf of the public. This aspect is particularly important in military announcements to ensure accuracy in reporting of the mission and the clear articulation of military strategy.
Using social media to announce military strategy to the public undermines the practices and chain of command this country has spent centuries establishing.
Just because a military strike is on his mind and therefore on his Twitter, it appears that policies and procedures are chosen based on whims of the president instead of through thought-out, critically-analyzed decisions.
Military strategizing via Twitter is dangerous at worst and chaotic at best. It is not a transparent way for the commander in chief to conduct targeted military strikes on a hostile regime.

Situations like these require and deserve focused, clear direction from the top in an effort to maintain this country’s stellar military reputation.