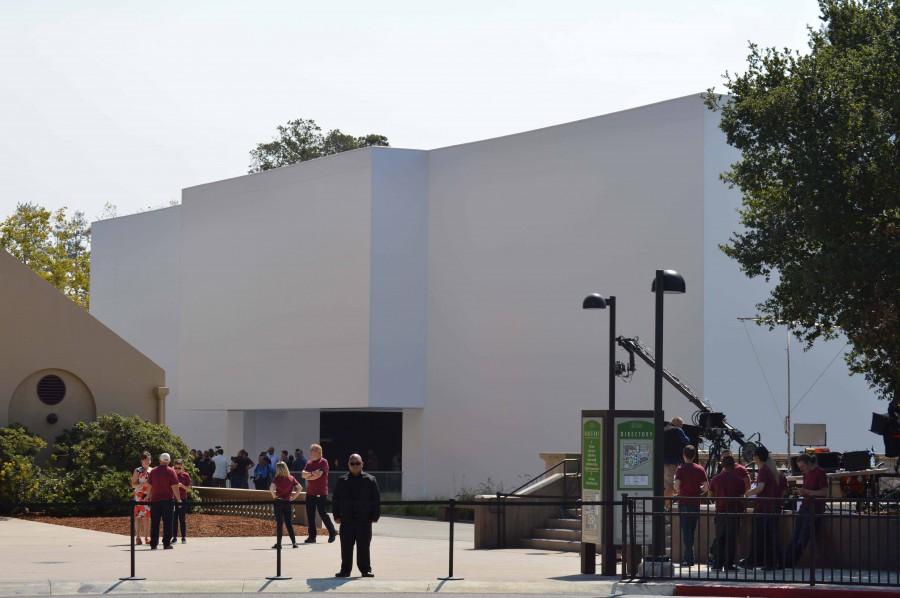 The mysterious Apple cube that was under construction throughout summer.

With more pre-orders for the iPhone 6 than any other iPhone before, the Apple Inc. keynote on Sept. 9 at the Flint Center on De Anza College’s campus was a stellar success for CEO Tim Cook.

The event itself, however, was pretty underwhelming. The event consisted of a herd of sweaty journalists and investors congregating to hear Cook and his engineers tell them about what anyone could have read on a press release on Apple’s website.

The event began with an inspirational video of Jobs’ “Here’s to the crazy ones” campaign, set to upbeat indie music – you know, to make us feel good about ourselves.

Cook walked out afterwards to tell us how excited he was to unveil what Apple has been working on all year. Some people in the audience were visibly shaking with excitement, as if Steve Jobs’ carcass was going to descend from the ceiling with the iPhone 6.

Sadly, the keynote dedicated a large portion of time to advertising plugs for various companies who wanted to show off their products in the guise of a tech demo. The absolute worst moment of the event was when U2 performed a song and then announced to the crowd that they are going to force their way into every iTunes user’s library for free, whether we like it or not.

Finally we heard the magic words: “One more thing.” At this point, even I was excited. What could it be? A spaceship? An even bigger iPad? I couldn’t wait. I palmed the iPhone sitting in my pocket, thinking of all the joyous occasions we’ve spent together – evading social situations, hiding in my room from family dinners, checking Facebook every eight minutes – what beautiful device will Apple give me now?

As a video began playing, I stared in awe. The camera flew around the device showing off the intricate details in the metal, the sleek aluminum corners, the perfectly glossed buttons. It zoomed out and I thought to myself that I should’ve worn more deodorant because I was sweating more than usual.

And finally, there it was… It’s… a watch?

This was the one more thing? An ugly watch that lets me read walking directions to Whole Foods across the street? Really?

“Customizable to fit your personality!” Cook said as he switched the watch face to a Mickey Mouse theme.

After the event, the attendees and I walked out to the big, white mystery building that was being built for most of summer in the Sunken Garden. The big mystery was that they allowed the attendees to try out all the products that were unveiled, which was a nice thought until you realize they spent thousands of dollars building a glorified kiosk.

I should have just stayed home and refreshed the Apple homepage.

But no, I heard from my friends that the live stream underwhelmed as well. Ugh.