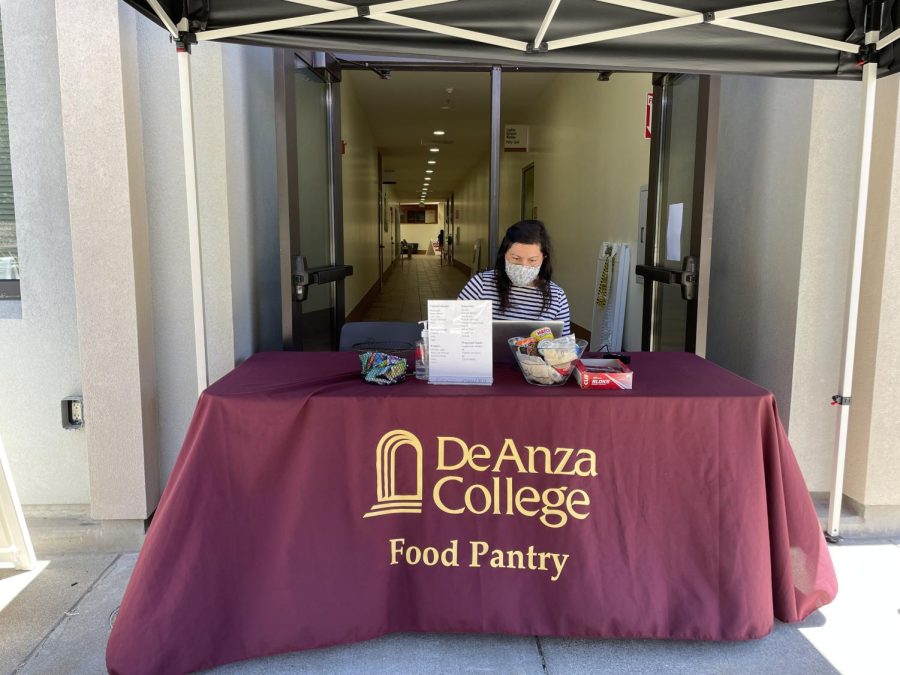 Staff at De Anza's food pantry wears a mask while working as per district policy.

On May 5, Chancellor Judy Miner proposed to make changes to Foothill-De Anza’s AP 3507 COVID-19 Vaccination Requirement by making indoor masking reflect that of Santa Clara County’s guidelines and be optional as of June 24, on Graduation Day.

This agenda item was voted on during the latest Chancellor’s Advisory Council (CAC) meeting on Friday, May 20, in which the majority of its members abstained from making a decision but voted to continue masking up until Graduation Day.

In her reasoning, Miner wrote in a letter to faculty and staff that interest in recent in-person events such as De Anza’s Enrollment Day — that had more than 800 participants — and the reopening of De Anza’s Flea Market has brought back a feeling of normality. With the popularity of these events, Judy mentioned a possible interest to unmask in time for graduation and in-person summer classes as people anticipate a face-covering free future.

“As we continue to move toward a ‘new normal’ for in-person activities, I want to share how uplifting it has been to attend recent major gatherings,” Miner said. “Remind us of the opportunities to regain on-campus vibrancy that we have lacked for more than two years.”

Santa Clara County lifted its mask mandate on March 2. Miner said that the district had followed the county’s COVID-19 policies without modifications up until that point, but that they opted to continue requiring indoor masking for the comfort of faculty and students that expected a masked spring quarter.

Results found that most people in the district were still interested in continuing to mask until Graduation Day, some less were interested in making indoor masking optional in general, and the least were interested in waiting through Memorial day and reassessing at a later date, which would have been May 20.

Some questions that came up during the CAC meeting were on technicalities  — such as if individual faculty members can require masks in their classrooms. Math Professor Cheryl Jaeger Balm asked if so, if special terms could be included in the footnotes for summer class catalogs that are currently open for registration.

“Will faculty have individual purview over their classrooms, or will students have the right to not mask regardless of instructure preference,” Balm said. “So is it enforceable and (will the administration) have our backs?”

President Lloyd Holmes responded to Balm to confirm that if masks are optional campus wide, faculty would still be able to enforce it within classes.

FA President Timothy Shively spoke during the meeting with concern that changing current masking policies would discourage students from taking on-campus classes and that he feared that having faculty individually enforce masks would be a “nightmare.”

In connection to Shively’s concerns with public safety in a rise of COVID-19 cases, Human Resources Director Myisha Washington said that the college has not seen an uptick of positive COVID-19 cases based on self-reported staff and faculty on-sight exposures.

Susan Cheu served as acting chancellor in Miner’s absence and facilitated voting via Zoom reactions. 11 voted in favor of extending the current masking requirements up until June 24, zero voted no and one abstained. In a second vote for following the county’s guidelines after June 24, five voted in favor, one no, and four abstained.

Updates on the next quarter’s indoor masking policies are expected to be announced in the next coming weeks as CAC and Miner gather more information from their constituents to make their decision.

Shively was the only to vote against following the county’s requirements post June 24.

“What is the masking hurting, really,” Shively said. “If we really want to bring back the highest number of people possible, then we keep the masks on for as long as we need to.”