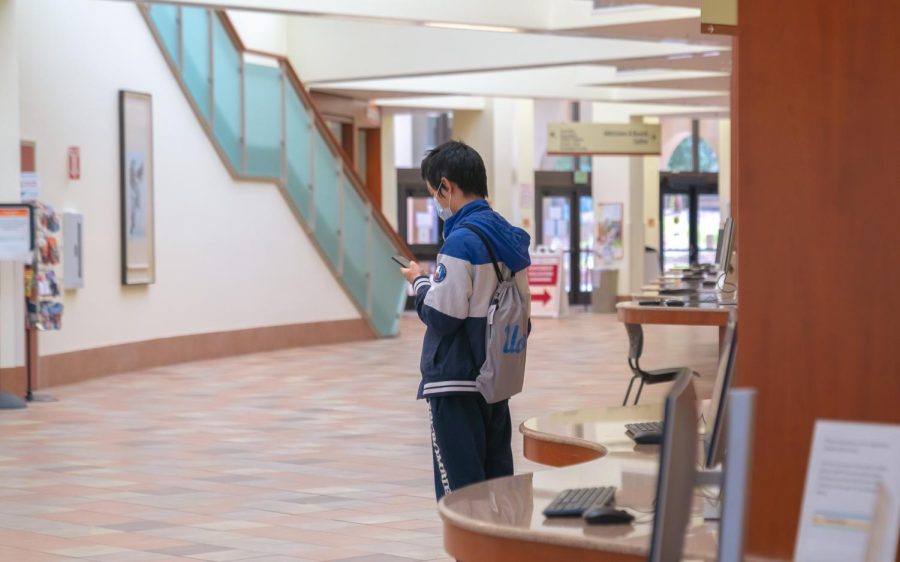 Expanded hours for all on-campus student services began on April 6, and large in-person events like the Clubs and Inter Club Council’s (ICC) quarterly club fair and the De Anza flea market are slated to happen later this month. (Porter)

As some students return to campus and most others continue to prefer online learning, Foothill-De Anza Chancellor Judy Miner said a new enrollment management committee will be formed to “reimagine the district” in a hybrid way.

The start of spring quarter has brought more Foothill-De Anza students back to campus with more in-person events and instruction. Expanded hours for all on-campus student services began on April 6, and large in-person events like the Inter Club Council’s (ICC) quarterly club fair and the De Anza flea market are slated to happen later this month.

“We’re always working to be more student-centered,” Miner said. “And I think the hybrid opportunities both for programs and services really show that that’s more than just rhetoric.”

The expansion of in-person services followed a statement from Miner to district faculty on March 19, where she requested “student-facing offices” to open more on-campus hours. Offices that provide student services such as Financial Aid, Admissions and Records, and College Life have all extended their Spring quarter hours.

According to Miner, the district is encouraging all services that can come back partly in-person, but prioritizing those that students have said are most vital to them, such as the library and mental health resources.

“It will never be one-size-fits-all,” Miner said. “We recognize not everybody can take advantage of telehealth because there may be housing issues or situations with other family members where they don’t necessarily want to talk about that in front of other people.”

Since the spring quarter has begun, many Foothill and De Anza offices have maintained the same in-person services but expanded their hours. According to Student Activities Coordinator and ICC advisor Maritza Arreola, the office of College Life — which acts as the main resource and information center for students —  has expanded its in-person hours during the week while retaining their online services.

Arreola said she has seen the library and other Zoom spaces open on campus as well.

“I think those kinds of things are encouraging students to come on [campus] more than last quarter even if they don’t necessarily have a class,” Arreola said.

She said this is in response to surveys gathered by the district where students said they wanted increased library hours where they can access Wi-Fi and loan technology.

ICC is also planning in-person events such as Spring Club Day. Their first hybrid club fair since the pandemic is set to be on April 28, where clubs will have tables set up in the De Anza quad to introduce to students who they are, how to join and other information in hopes to gain members.

“Student organizations are also fighting to come back to campus a bit more. This is going to be the biggest on-campus thing since March 2020,” Arreola said.

The De Anza flea market is also going to return in-person for the first time since the pandemic on May 7. The De Anza Flea also celebrated its 50th anniversary before shutting down in 2020.

“We definitely want to honor that legacy,” Arreola said. “There are a lot of people who learn about De Anza through that flea market. People come from all over the state to supports these vendors and local businesses which that in turn helps with DASG funding.”

Despite the college’s efforts to bring back live events and open more services in-person, Kevin Weng, 18, undeclared major, and greeter for the De Anza Student Services Center said that he believes that many students are in no rush to get back on campus.

“Because they’re already used to the online format, they’ve adapted to use online resources to get help instead of actually coming to school,” he said.

Weng said he sees few students come into the Student Services Center on a given day.

“I think most of them would prefer to get help online,” he said. “It’s really flexible. You get to manage your time better. You don’t have to stick with such a strict schedule.”

The district has seen preferences for online classes in student surveys as well. Miner said many of the course offerings for spring quarter were dictated by the student interest for either online or in-person services. She said that she recognizes despite their efforts to entice them otherwise, that there will just be some students that want to stay online.

“Especially students who might be very close to finishing up, they may have moved out of the area, but even if they haven’t, they might have jobs now that they want to be able to keep,” Miner said. “The world of work has changed, and the world of education has to catch up with that.”

According to Miner, both Foothill and De Anza Colleges are planning to “reimagine the district” in order to move forward in a hybrid way. Miner said she will be hiring a senior adviser this week for “Reimagining Foothill-De Anza” who will be tasked with forming a district-wide enrollment management committee.

“I believe we need to start with a district wide enrollment management plan that addresses the issues of what courses we offer?” Miner said. “I want to hear [online] students say that there was a sense of customization that met their needs as readily as somebody who wanted to be on campus the whole time.”