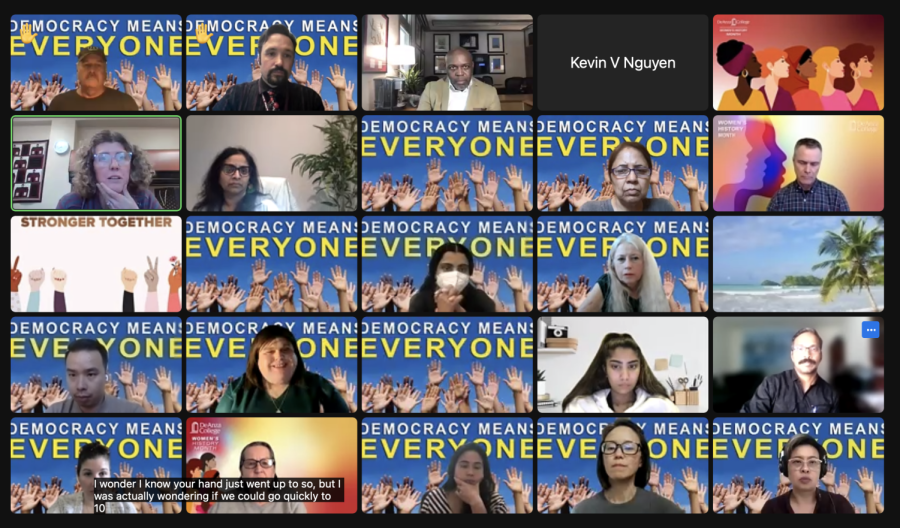 “When I got here, people were saying over and over again that our shared governance model is terrible.”

That is what Lloyd Holmes inherited when he was hired as De Anza College president in 2020, and it’s an issue that could drastically re-shape the college depending on what he does next.

On March 17, the College Council voted to recommend, to Holmes, a new shared governance model drafted by a task force it commissioned made up of representatives from the college’s four major constituents: administrators, faculty, classified professionals and students.

Also in attendance were over 100 stakeholders watching and commenting on Zoom.

The Shared Governance Task Force, which had been researching and workshopping alternative strategies since last April, presented a new model that would eliminate the college’s three separate planning and budget teams (PBTs) in favor of a new Program Allocation Committee (PAC) model, where select members from those teams would work cross-functionally, alongside other stakeholders, in one consolidated group instead.

Despite the reorganization, the PAC’s directive would be the same as the teams that came before it, in that the PAC would advise the council and president on the college’s needs, strategies and goals, especially as pertains to budgeting.

Supporters of the task force’s proposal said it will make shared governance a more direct and inclusive democracy.

Even though two-thirds of the council voted to accept the recommendation, Holmes has the final say on the matter. He can decide to accept, deny or ask for revisions. At the time of publishing, he had reiterated that he is not comfortable with the proposal as is.

“I’m wondering if this is going to make understanding what’s going on at our institution easier,” Holmes said. “It’s not that I’m not willing to try something new. I’m just going to say that I do have some questions that I’m going to have to have to work with this task force on.”

At the heart of the debate is whether introducing a new horizontal committee on the ground floor will make governing at De Anza College better or more effective. Holmes said he is unsure about how the PAC will effectively replace the work of the PBTs and thinks that the new committee could end up being redundant to the existing college council, which already has representatives from different constituencies.

He also suggested in an email follow up to Thursday’s meeting, obtained by La Voz, that frustrations with the current structure could be smoothed over with better communication training.

But members of the task force said he is missing the point when trying to paint the PAC as an unnecessary “added layer.”

“For one, it’s meant to be a check and balance,” said Tim Shivley, a task force member and Faculty Association president. “Otherwise, we’d just be shifting power from the college council onto the PAC, creating an inverted structure.”

Laureen Balducci, the administration representative on the task force and Student Services dean/director, said equating the new PAC to the existing College Council is not indicative of what the council actually does.

“The whole point is that PAC is going to be doing the deep dive of program reviews and CAS (Council for Advancement of Standards in Higher Education) standards,” Balducci said. “The council was not going to go through all of those. They report out on programs, but not in the depth and breadth needed.”

In the current governing structure, the president would likely hear reports from senior management members of the PBTs most, since they also have a seat on the council.

Critics of the current structure say the PBTs concentrate power to a select few and often function in silos. Several audience members at the hearing spoke up, recounting how information is not always shared across the groups, leading to uncomfortable moments such as when one group does not know that the other has approved hiring for open positions until after the fact.

Earlier at the same meeting, an agenda item to approve a recommendation made by the current Instructional PBT to hire a classified professional and an administrator rather than fill four open faculty positions was punted to a future date when several members decried that the voting process was undemocratic and hastily put together.

Chesa Caparas, an English and Asian American studies professor who has a vote on the council representing the affinity group Asian Pacific American Staff Association (APASA), said she disagreed with using specialized knowledge as a reason to maintain the PBTs and voted to support the proposed new model.

“I feel that this could save time, because if everybody’s working with the same information, then there doesn’t need to be that work of translating across different groups,” Caparas said.

Keri Kirkpatrick, the classified professional representative on the task force and senior library technician, not only agreed with Caparas, but said the PAC would actually align with the college’s recent focus on giving students a well-rounded, holistic experience at De Anza.

“Services don’t exist in a vacuum. Instruction doesn’t exist in a vacuum. So why are these decisions being made in these vacuums?” Kirkpatrick said. “I think that having this divide between (the PBTs) where nobody knows what’s going on on either side only adds to the misconceptions that groups have about each other.”

The focus on redesigning shared governance comes at a time when California, along with other states across the country, is experiencing a continued decline in college enrollment and where De Anza faculty and staff have had to shift their work online for almost two years due to the pandemic.

Jim Nguyen, another faculty representative on the task force, and political science and Asian American studies professor, has the perspective of chairing and serving on the Instructional PBT dating back to 2016. He also currently sits on Student Services PBT meetings.

He said the issues go beyond the communication tweaks that Holmes suggested.

“If it hasn’t happened then, why would it all of the sudden happen now?” Nguyen said. “We can set up as many structures or guidelines as we want, but if there is no oversight making sure that those processes are being followed, then all we’re left with is just a piece of paper.”

He added that the PAC could fulfill that function and make inclusion more meaningful. In the proposal, the task force recommends the college invest dollars in training, onboarding and mentorship.

“That would be putting your money where your mouth is and not just giving people spots and thinking that they are truly included,” Nguyen said.

DASG Chair of Marketing and Communications, and student representative on the task force Sunnie Chen, 23, said she agrees with Nguyen’s assessment and thinks that the college needs to invest in paying students for participating meaningfully in shared governance for them to carve out enough time.

“We really don’t have anywhere near equitable representation and it’s very obvious,” Chen said. “Students feel like they don’t have a say in what goes on in their college.”

While the issue of paying student government is not new, the newly proposed model does formally outline how it could happen — mainly through the college’s new Guided Pathways initiative where funding dollars are already allocated.

Chen said she hopes the college is able to make these changes soon while the momentum is there, as the student government will inevitably turn over at the start of the next academic year.

Before the council voted to adopt the task force’s recommendation, she addressed Holmes directly:

“President Holmes, I know you’re worried about getting blamed if things go wrong, but we can decide on this together as a whole,” Chen said.

“We see you as our leader in this democracy. We’ll be there to back you up when things go wrong, but how can we if we don’t have the chance to even try it?”