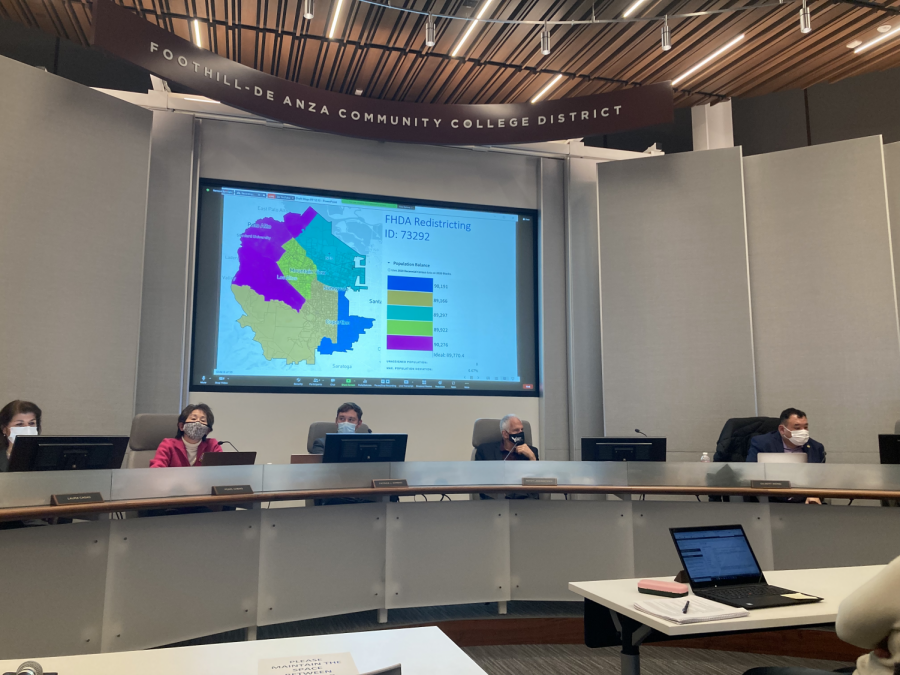 Dec. 13 - The Foothill-De Anza Board of Trustees reviewed three draft maps ahead of their move away from at-large elections. The Board will need to ratify a new map with five distinct areas by February 2022.

On Dec. 13, the Foothill-De Anza Community College District Board of Trustees voted 4-1 in favor of advancing two out of three draft maps presented to the public with an eye towards consolidating that down to one in the coming weeks.

Since 2019, the governing body has been working to move away from its existing at-large election system where members of the five-person board can live anywhere within the district, so long as they win their seat in a districtwide vote.

The board has until February 2022 to ratify a new map which will see the district be carved up into five distinct areas each with their own elected representative.

Monday’s meeting was meant to be the first of two public hearings to review three draft maps created by Redistricting Partners, a Sacramento based company that Foothill-De Anza has been employing to guide them through this process.

To create the three proposals, Redistricting Partners said that they analyzed over a dozen community-of-interest surveys and eight maps submitted by members of the public.

While each of the proposals are unique, they all must meet the same general requirements laid out by the state’s Voting Laws, the board and the public.

Those requirements boil down to roughly having equal population for each area, geographical continuity and no incumbent protection, or gerrymandering.

The draft maps presented to the public on Monday all adhere to those principles but vary in terms of prioritizing what existing boundaries to honor.

Newly appointed president of the board, Patrick Ahrens, said that he is strongly in favor of Draft Map A, which prioritizes drawing new districts that align with city boundaries.

“I like Map A because it’s clear,” Ahrens said. “When folks in the community look at who their trustee is for the community college system, not a lot of people necessarily know.”

“My thinking is, let’s make it as simple and as clear and transparent as possible. People know their city boundaries.”

All members of the board, with the exception of trustee Gilbert Wong, said that they would be comfortable moving forward with the districts as drawn on Map A.

Although they did vote to advance Map C as well, which prioritizes upholding as many underlying elementary, high school and unified districts as possible.

Trustee Wong said that he would rather the redistricting process honor existing school boundaries instead of cities.

“I think that it is very important to have that continuity where students that go to school together and have common interests stay together as a voting block,” Wong said.

He also mentioned how for his own daughter, her existing school districts already go beyond city lines.

“My daughter and I live in Cupertino, but her middle school is located in the city of Sunnyvale,” Wong said. “It’s really sad that because of district lines, half of the kids at her school will be going to Fremont High School and the other half will be going to Homestead.”

“I see these new maps as feeding into the community college system.”

The Foothill-De Anza Community College district encompasses the cities of Cupertino, Sunnyvale, Mountain View, Los Altos and Palo Alto. According to the latest 2020 census, the total population is approximately 450,000, which means that each trustee would represent about 90,000 constituents.

A group who is absent from the table of discussion are the vast amounts of students that travel into the district to attend either or both community colleges.

Paul Mitchell, president of Redistricting Partners, said while that is the reality of voting logistics, students shouldn’t be precluded from making their voices heard.

“Unfortunately, the college district in which you live will be where you actually get to cast your vote,” Mitchell said. “However, I think it’s important for students to have a voice in this process to make sure that the districts are drawn in a way that is fair but also to maximize the ability for them to advocate for the kind of programs that they might need.”

Because the current board has been electing members in an at-large system, it either has multiple members living in the same area or has areas where members do not reside in at all.

Trustee Laura Casas, who was also appointed vice president to the board on Monday, said that she sees both sides to this impending change.

“Ten years ago, we had three trustees from Palo Alto and nobody from Cupertino; now it’s the other way around,” Casas said. “At least this new plan will ensure equal representation.”

She added that it will always be difficult to balance local and district-wide perspectives irrespective of the election system.

“If you’re elected by a certain population, you might be a little closed minded and forget to look at the broader picture,” she said. “By the same token, if the rest of the trustees don’t represent the same population as you, they’re not going to vote on issues that are important to you.”

“Hopefully in this process, the board will become more inclusive.”

Ahrens on the other hand, who is the youngest and only renter on the board, said that he embraces this new change whole-heartedly.

“I’m excited that every area is going to get their own representative,” Ahrens said. “We’re the last community college district in the county to make this change and I’m looking forward to working with whoever is elected to make sure that this district remains the best in California.”

Existing board members will serve out the remainder of their terms.

A recording of the Dec. 13 meeting can be found here, with the next public hearing taking place Jan.10. Community members are encouraged to express their opinions of the proposed districts by emailing [email protected].