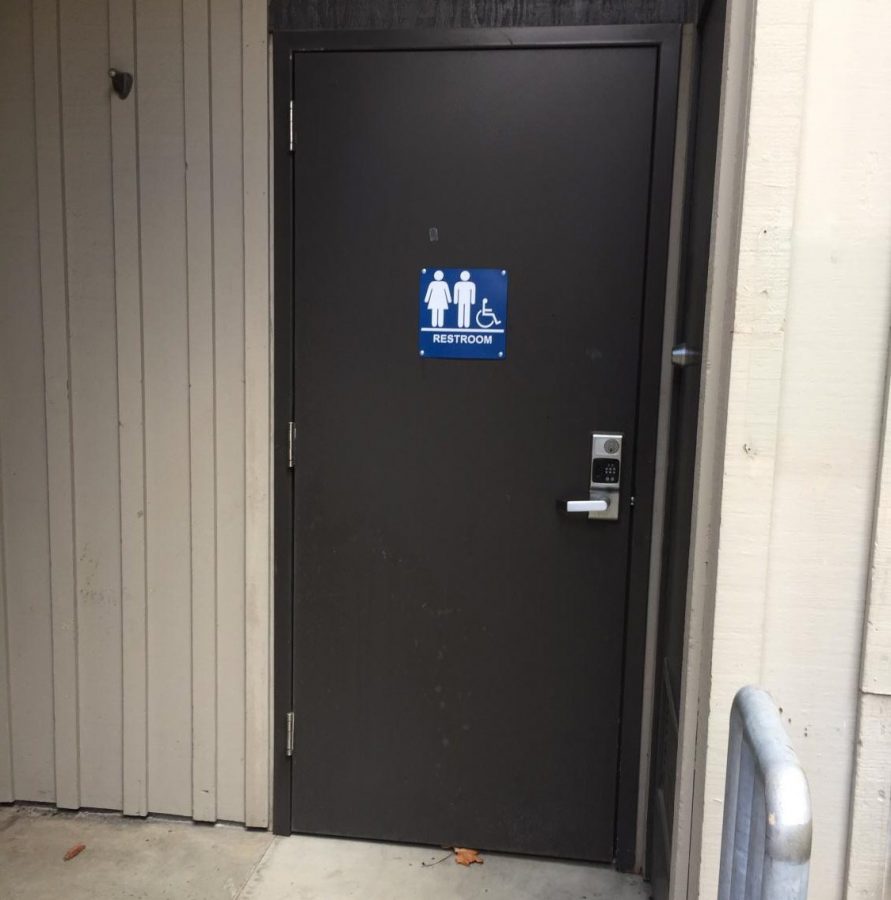 This gender neutral bathroom is located in the L4 building on campus. It is locked and requires a passcode to enter.

These facilities provide a safe space to gender-nonconforming, nonbinary and transgender students and staff as well as to parents of young children who do not feel comfortable using single-sex facilities.

In 2014, De Anza announced their intentions to convert existing restrooms into gender-neutral facilities and also worked to install three single-occupancy gender-neutral bathrooms over the course of that summer.

Currently, there are two gender-neutral facilities located in the PE and G building on campus in areas that have exterior door access, meaning one does not need to go through a building to access the restrooms. Both locations are currently unlocked for use.

There are two more gender-neutral facilities located in the East Cottage Building near Flint Garage and the Multicultural Center off parking lot B. These restrooms are inside buildings, meaning the building needs to be open and staff need to be present in it for them to be accessible.

Since most of De Anza’s student population is working remotely, some locations and buildings are not open. For safety reasons, buildings can not be  left unlocked without staff present.

Francesca Caparas, the current head of the Women, Gender and Sexuality Advisory Council, is advocating for more gender-neutral facilities on campus.

“You have such a short period between classes, and our campus is really big,” Caparas said. “Having to go across campus to find a restroom that aligns with your identity can be stressful and impact academic performance. It can also distract people in class because they haven’t been able to use the bathroom.”

Professor Julie Lewis, the department chair of African-American studies, supported efforts to advocate for more gender-neutral facilities and expressed the need for De Anza to go further in accommodating students.

“I think all bathrooms should be gender-neutral,” Lewis said. “This is about equity. Will you be an equitable institution and provide students what they need? That is simply a yes or no answer.”

In response to the concerns raised by Caparas’ committee and by professors on campus, Mahato, appointed the director of college operations in January, is opening up three more gender-neutral facilities to students around campus.

“Currently, we have three locations on campus that don’t have all-gender bathrooms in place: in S2, S6, and L5,” Mahato said. “We are looking to modify the locks and the signage around the bathrooms in these areas to increase accessibility to students.”

The next campus facilities meeting is also set to discuss the possibility of more gender-neutral facilities on campus. It is set to take place on Feb. 1 at 2 p.m.