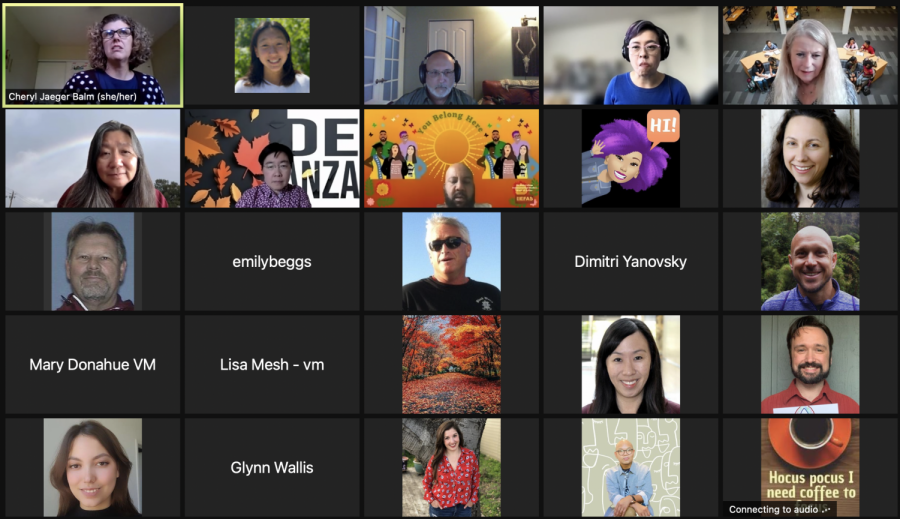 The De Anza Academic Senate discusses the potential recipient of the ASCCC exemplary program award at their Oct. 25 meeting.

The De Anza College Academic Senate furthered its conversation from last week on how to help low-income students and students of color this Monday.

Shagun Kaur, senate member in the division of language arts and coordinator of the Academic Senate for California Community Colleges Open Educational Resources Initiative, said that the group is working hard to financially support community colleges as they implement more inclusive and diverse courses.

“The audit framework ensures that funds are equitably distributed as it was shared that there’s $115 million that is going to come out that has been approved by the governor and CDC.” Kaur said. “The framework is to ensure that the federal and state guidelines are being followed and to ensure that we do not create have and have not situations, where a select few colleges reap the benefits and others are left with the rest of it.”

“What we’re looking for is evidence of showing need, and innovation, demonstrating collaboration, supporting the mission statement and how this could be a model for other community colleges, especially as it comes to cost and replicability,” Balm said.

Balm said the winning program will be awarded $4,000 to further empower its teachings and progress. Dawn Lee, a senate member in the division of professional development, suggested nominating the multi-racial series hosted by the ehtnics studies department.

“The panels included faculty, classified students and community members giving and highlighting their experiences, culminating in a final multi-racial conversion,” Lee said. “I felt that it was really, really good.”

Another nomination for the award included De Anza’a office for undocumented students, which offers health, financial and legal guidance along with emergency cash grants to students in need.

The Senate did not reach a decision, but plans to meet next week to finalize its decision.