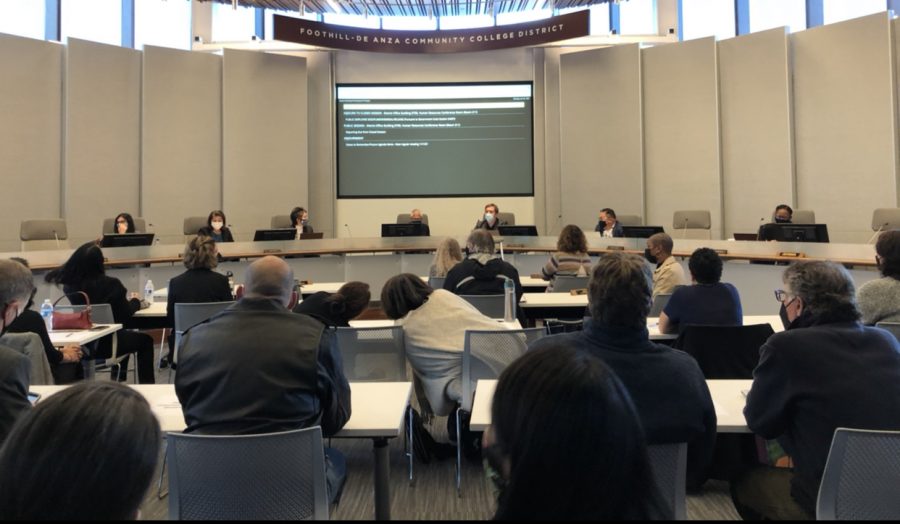 The Foothill-De Anza District Board of Trustees holds an emergency meeting on Oct. 25 to deliberate and hear testimony on the future of Foothill President Thuy Thi Nguyen.

Los Altos Hills – Foothill College will have to begin recruiting a new president.

The Foothill-De Anza District Board of Trustees held an emergency meeting on Oct. 25 to decide the fate of Thuy Thi Nguyen, college president since 2016, whose future at the school was brought into question after years-long acrimony between her and members of faculty brought about the Academic Senate’s first ever vote of no confidence.

Nguyen’s tenure will come to an end on Nov. 1 after five years in which she was the nation’s first Vietnamese-American community college president. Her administration framed most of its objectives through the lens of equity, access and inclusion, and she recently even spoke out about the importance of diversifying school hires.

But the disharmony between her and key faculty members eventually proved to be untenable. In over 70-plus pages of testimony published before the meeting, including an hour of public comment, the vast majority of participants accused Nguyen of being a rash decision maker, not sharing proper governing power and creating a toxic work culture.

In fear that the vote of no confidence could be misconstrued as racially motivated, many faculty of color spoke out or co-signed their colleagues’ complaints. Lan Truong, who served as dean of counseling at Foothill for five years, and is a Vietnamese immigrant like Nguyen, gave the sharpest rebuke of her former boss.

“I resigned not because I didn’t love my job, where I left behind a tremendous division and a college I hoped to retire at. I left because of Thuy Nguyen,” said Truong. “She did not support us and she undermined our success. I want to make sure that this is not about race.”

After two-plus hours of deliberation behind closed doors, Board President Peter Landsberger reported that the members opted not to discipline Nguyen, but voted unanimously not to renew her employment contract after the expiration of its term on June 30th, 2022.

“While I’m limited in what I can say about what led to the action, I can say that the Board believes that this was needed in order to allow the college to move beyond its current state of conflict,” Landsberger said. “The board respects President Nguyen’s accomplishments and recognizes that she is admired by many.”

Foothill biology professor and Foothill-De Anza Faculty Association chief negotiator Amy Edwards said she was one of those admirers who was enthusiastic about Nguyen’s hire at first, but soured on her when she noticed that communication with the president was deteriorating.

“Having admirable goals does no good if you don’t build a coalition of all stakeholders to reach them,” Edwards said. “She came to our division meeting and called us gatekeepers to student success with no room for dialogue; just shaming. She does not have a monopoly on equity goals.”

Amid an avalanche of negative comments from her colleagues, organizations outside of the college such as the NAACP, the Asian Law Alliance and the Vietnamese American Women Professional Association did submit statements in support of Nguyen. In one form or another, they mentioned the importance and symbolism of her being in a key leadership position in a time where the country is still grappling with racial inequity.

Dennis Robinson is a trained mediator and has been a philanthropic advisor for the Silicon Valley Community Foundation. He spoke at the public meeting about how his experiences as a young busing student in desegregated Ohio made him appreciate how difficult it could be for educational institutions to implement reform.

“Trying to put progressive strategy around equity at any institution in a place like Silicon Valley is going to be tough, unpopular work and not everybody is going to be ready for that,” said Robinson.

While he acknowledges that the number of faculty of color who spoke out against Nguyen suggests some problematic behavior, Robinson had hoped that the sides would return to mediation.

“Thuy obviously has some things that she could possibly do better or differently, but I bet so do they,” Robinson said. “In these tough moments, both sides have to rise to the moment, do a little more, and start from things they have in common. My expectation would be that this requires more mediation as opposed to less.”

Noticeably missing from the discourse was a student perspective. Those that submitted testimony described a warm relationship with Nguyen. One that did get a chance to speak was Foothill student representative to the board Rachel Homayonfar, who lamented that she did not get a vote.

“I have nothing but good experiences with President Thuy. She has been kind, considerate and very helpful; and I know that many students share this view,” Homayonfar said. “However, it truly saddens and alarms me to hear what the faculty and staff have expressed. I think it is vital for the board to respectfully acknowledge both sides, recognizing all experiences and concerns.”

La Voz contacted President Nguyen for comment, but she has not responded in time for publication.