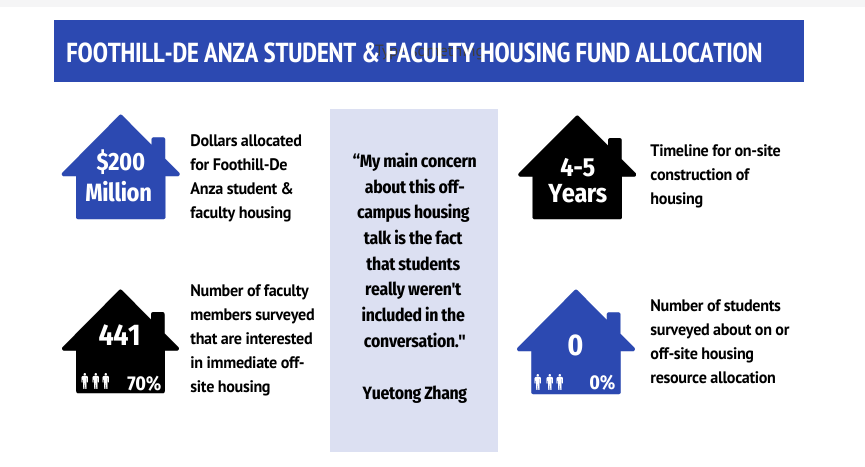 With an allocation of $200 million toward student and faculty housing, the Foothill-De Anza Board of Trustees is contemplating partnerships with two housing developers.

The two potential partnerships are with the Mercy Housing and Adobe Communities Team and Alta Housing, both of which offer plans for off-campus locations.

In a survey conducted by Mercy Housing and Adobe Communities, about 70% of Foothill-De Anza faculty expressed interest in living at a housing location in Palo Alto. The survey also asked faculty members how they felt about the size of the apartments and took note of how well the location would fit their income levels and commute times.

The same survey has not yet been done for student housing.

Plans are still being solidified and it’s still unclear which housing will be going to students and which will be going to faculty, said Pam Grey, Vice President of Administrative Services.

During the Nov. 2 Study Session of the Board of Trustees, several student trustees expressed a desire for a student survey to be conducted.

“It would be nice to have student input on the creation of the survey itself to make sure that we’re asking the right kinds of questions,” said Priya Vasu, 19, sociology major and Foothill College student trustee. “We want to make sure that we have that survey put out to all of our students just so we can reassess the need and see if it’s changed or gotten worse because of the pandemic.”

The $200 million that has been given to address housing issues was a direct result of the passing of Measure G, a bond passed in March dedicated to upgrading overall Foothill-De Anza facilities.

“One of the main reasons I think the bond passed in the first place was because we were making sure we were telling voters about how this would impact students and help students find housing,” said Vasu. “So I feel like it’s, it’s almost a shame if we don’t follow through on our promise to the voters since they were largely responsible for this bond and passing the bond.”

The money from the bond has also gone to improving accessibility and classroom infrastructure and prioritizing student comfort, said Grey.

Grey said, “The effort students and faculty voters have put into passing measure G is resultant in the fact that we now have $200 mil to put toward housing.”

This is not the first time the Foothill-De Anza district has planned for housing.

In 2015, the district had conversations about the possibility of on-campus housing via the replacement of the Flint Center. When this was rejected, they also explored working with Catholic charities or other programs that help students facing housing insecurity in February.

“This is something that’s been an ongoing battle,” said Kimberley Lam, 19, political science major .

Currently, the board has only proposed off-campus housing, stating that it wants a more immediate solution to the housing crises students and faculty are facing.

However, Vasu expressed concern about the lack of concrete planning for student housing.

“I’m not worried that it won’t happen because I definitely know that the district has put effort into it but I think that it definitely should be more of a focus than it has been,” Vasu said.

Yuetong Zhang, 19, English major and member of the De Anza Facilities Committee, felt that there was little transparency and discussion between the board and students.

“My main concern about this off-campus housing talk is the fact that students really weren’t included in the conversation,” Zhang said.

In regards to whether or not the housing is on or off campus, Lam says it’s possible to advocate for both.

The board hopes to further solidify for housing plans in upcoming meetings.

“I really think that if we want to continue to push De Anza’s message of inclusion, of really caring for our students, focusing on housing is the least that we can do,” said Lam.