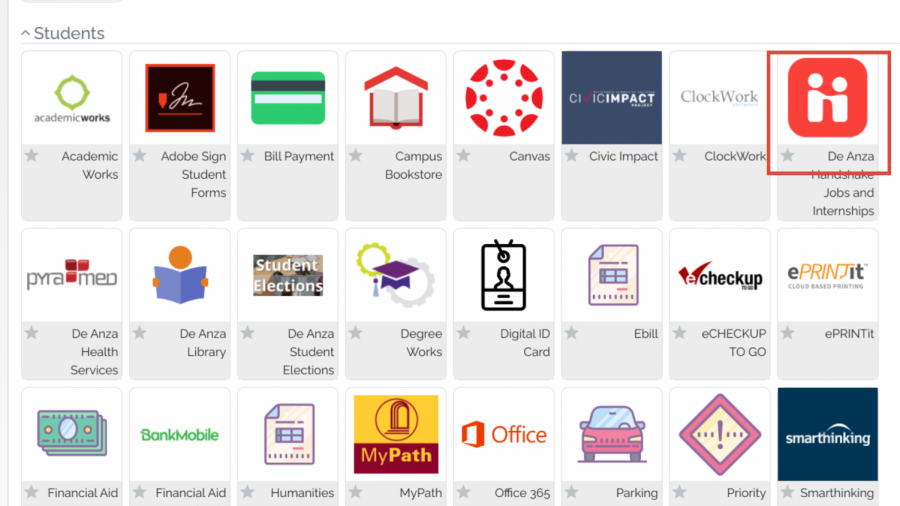 Students can find the Handshake app under their student applications tab on their Foothill-De Anza student portal.

The partnership formed at the start of the 2020 fall quarter, and is the end result of more than a year of work by De Anza College career services counselor Helen Pang and Foothill College adjunct faculty member Miloni Gandhi.

Students can fill out a profile on Handshake and find jobs and internships relevant to their interests and experience.

What makes Handshake differ from similar platforms such as Indeed and LinkedIn is the focus on students.

Employers using the platform know that the user base they’re interacting with are likely to be entering the workforce for the first time.

“LinkedIn can be very intimidating for a first time job seeker because of the scale of what you find there,” said Gandhi. “And Handshake is really prepping people who have never been in the job market before to try to do the things that they need to secure that first interview or that first job.”

A key element of Handshake is its community building aspect. Users can choose to make their profile visible either to the public or to employers only.

“It makes job searching, kind of like being on a social network,” said Gandhi. “I think that’s really enticing to the average student population because most students spend a lot of time on social media anyway, so this is a very seamless transition on doing something that is very social.”

Foothill and De Anza are some of the first community colleges to implement Handshake.

When Pang and Gandhi first approached Handshake, the platform was not yet ready to work with community colleges.

“Handshake itself has only really launched widely to community colleges this year,” said Gandhi. “So we’re able to really impact some of the decisions that they’re making on how they make this platform a good fit for our students.”

Pang and Gandhi hope this will help level the playing field between Foothill-De Anza students and four year college students.

“A lot of the jobs and internships you see there are also from companies who have traditionally only marketed to four year students,” said Pang. “So by us having access to it, our community college students will also have access to a lot of the same opportunities that before your college students get.”

Gandhi points to Handshake as being a “mission-driven” organization.

“Since Handshake started one of the things that they’ve had an increasing focus on, and in 2020 especially, is their commitment to democratizing the job search for everyone,” said Gandhi.

She also said that this coincides with the increased attention paid to racial inequity.

“We were really looking for ways to equalize the uncertainties that a lot of communities face in the job search process, especially for underrepresented students,” said Gandhi. “We all know that there’s no lack of talent at our campuses. But what we often face compared to four years is the lack of opportunity, a lot of employers just were not coming to our colleges.”

Pang and Gandhi hope that Handshake will be more used than Foothill-De Anza’s previous career system.

Currently, there are approximately 1,000 Foothill students and 1,600 De Anza students that have activated their Handshake accounts.

Pang and Gandhi are hoping to expand this number to cover the entire Foothill-De Anza student body.

“We only have a limited reach to the students that we directly interact with, but we would love for all the students to actually sign up and know about it,” said Gandhi. “And I find that it’s not because students don’t want to, it’s often just because they don’t know about it.”