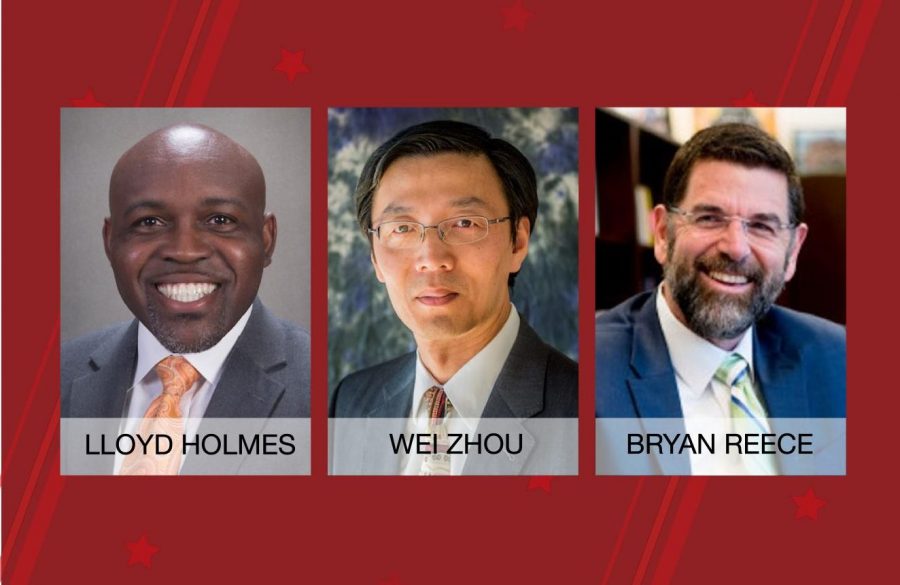 The candidates were selected by a 20-member presidential search committee, made up of a community member, administrators, faculty, classified professional staff, students, an equal employment opportunity representative and ex-oficios.

All three candidates have a background in working with community colleges as a part of administration. Most recently, Lloyd Holmes was and is still the vice president of student services for Monroe Community College in Rochester, New York, Bryan Reece was previously the president of Norco College and Wei Zhou was the president of Crafton Hills College.

Each candidate was given 40 minutes to answer as many questions as possible during the open meetings held throughout the week of May 10.

Housing has been a contentious issue for the district, with many students and faculty advocating for the Flint Center to become low income student housing amid increasing housing insecurity in the Bay Area.

In his current position as vice president for Monroe College in New York, Holmes said he was able to secure a $3 million grant to address food and housing insecurity.

Holmes acknowledged that it is difficult for a student to be successful in college if they are worrying about housing insecurity.

“If a student is facing challenges with food, clothing, and shelter, what happens in the classroom is not as important to that student,” he said. “We as an institution have an obligation to meet the needs that our students have.”

Reece said that while president at Norco College, he was able to secure a facility master plan that included housing development for staff and students in need, such as veterans and foster care students.

“We have to find affordable housing solutions, especially on the peninsula where housing is just crazy expensive,” he said. “We need to pull every resource that we can think of in terms of low income housing for our students to help settle that issue, so they can feel confident that they have a place to sleep.”

Zhou said he supported the idea of a college village, where students in need could find affordable housing within the city that would be combined with shopping areas and entertainment. At Crafton Hills College, he said he was in discussion with city developers to open the possibility of a college village.

“I think it’s incredibly, incredibly important for us to be able to handle this issue because of public housing insecurity, because of the skyrocketing house prices.”

The DASB Senate conceded that due to budget cuts, they have not been able to fund student programs that often support underrepresented student groups. The senate then asked how the candidates would support these groups.

Reece said he experienced a similar problem at Norco College. To combat this, he helped to create the Puente program, which is a program that supports Latinx students through providing them a counselor and a few members of faculty to create a space and a budget for their community.

He said that he would follow this approach at De Anza to help support the underrepresented groups on campus.

“We have to make a commitment to supporting programs for groups that are disproportionately impacted at the college,” he said.

Zhou said that supporting equity focused programs should be a priority.

“We need to do whatever we can to preserve those communities, to especially reaffirm our commitment to equity, making sure every student that comes to us can be successful,” he said.

Holmes said that it is important to put funding where students’ needs are, and that he has used his own money to help do that in the past.

“We have to put our money where our mouths are,” he said. “I will tell you that there have been times when our governing body wanted to find something, I just paid out of my pocket, because that’s important to make certain that the needs of our students, particularly those underrepresented students are getting met.”

Zhou said that clubs help to give students a sense of discovering where they fit into campus and help them plan for their futures.

“We want to help students find a place that they belong to,” he said. “We’ll also help them make connections externally beyond what they have today will help them to plan for the future.”

Reece acknowledged that remote learning may have an impact on student clubs and the challenges that may come with maintaining student clubs once De Anza is able to reopen.

“We need to reboot all these things as we start opening up the college campus again, getting these clubs and these activities involved,” he said. “This is part of what makes the student life on campus a rich environment.”

Holmes stressed the importance of being active and present with the clubs on campus as a leader within the De Anza administration, in order to make the students feel their presence on campus is recognized.

The candidates are currently in the process of being reviewed by the Foothill-De Anza administration, which will lead to a recommendation from the chancellor to the Board of Trustees regarding who should be the next president on June 2.

Students can provide feedback on the candidates before the decision is made.