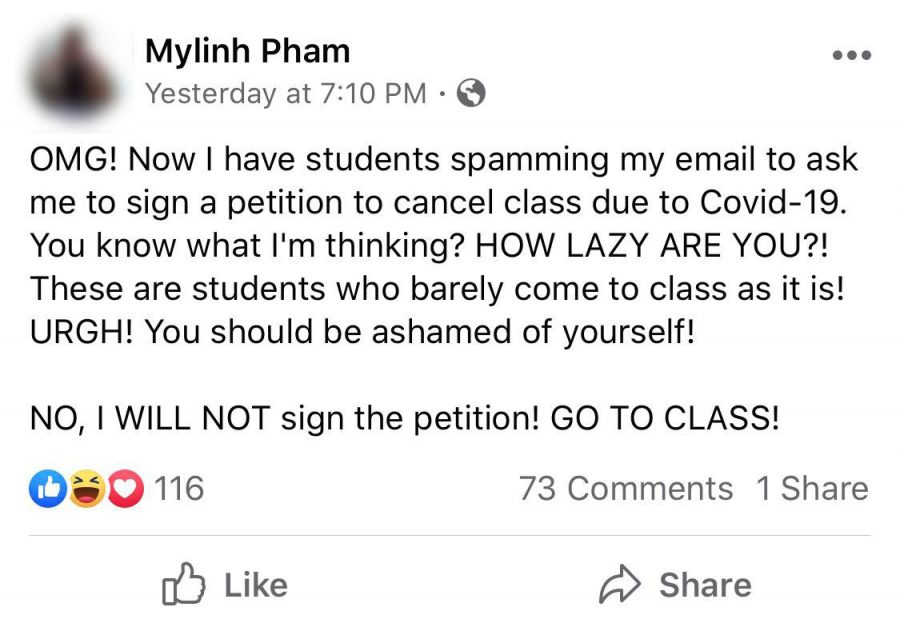 Late Sunday night, a part-time faculty member made light of signers of a petition that seeks to close De Anza campus due to local coronavirus cases, on an unofficial Facebook page for De Anza College.

Part-time history instructor Mylinh Pham wrote “OMG! Now I have students spamming my email to ask me to sign a petition to cancel class due to Covid-19. You know what I’m thinking? HOW LAZY ARE YOU?! These are students who barely come to class as it is! URGH! You should be ashamed of yourself! NO, I WILL NOT sign the petition! GO TO CLASS!”

From the time of posting, the Facebook post now has over 70 comments and 116 reactions, some praising the faculty member for sticking up to what they considered to be an attempt to get out of class, while others said that she was acting unprofessionally.

A petition created by Xiangze Liu, created six days ago, proposes closing De Anza campus because of local coronavirus cases in Santa Clara County. There are 43 confirmed cases since January 31 with one reported death on Monday, March 9.

The County of Santa Clara issued a press release ordering the cancellation of mass gatherings. This does not include schools at this time.

San Jose State has announced the suspension of all in-person classes for the next few weeks in favor of switching to online classes but the campus will remain open.

It is not clear that the petition will have any official effect on closing the school, but it shows that students have concerns in the wake of recent high-profile cases.

Pham said that she posted the comment in response to her students emailing her the petition.

“It stemmed from the petition being emailed to me specifically by students that rarely attend class, which is why I posted that comment,” she said in an email response to La Voz News. “If it were from students who actually have been attending consistently and they were actually putting in effort in class, I would be more concerned.”

Currently, the petition has over 1,000 signatures out of a goal of 1,500. The petition received traction Monday as students returned to the campus to attend classes.

Further comments were made on the post by members self-identifying as faculty.

“None of my students have tried that yet,” commented Elisabeth-Anne Mabie whose Facebook profile has them listed as an anthropology professor at De Anza. “If they did, I’d just have them do an extra assignment on the actual risks, the probability of undetected infection rates in the remainder of the population, the role of the media, and how this compares to other endemic viruses such as other flu strains. If they’re gonna start this conversation, they’d better come prepared.”

Comments from petition signers said they did not feel safe on the campus amid the viral scare.

“Worried for my health and the health of others. I have not seen any deep concerns in the campus from the higher-ups,” writes Andrew Huynh, a signer of the petition.

While some students and members of the community are concerned for their safety on campus, others take a more moderate stance.

“I think both sides are pretty valid. I get the concern for getting the virus, but I also get that it’s probably really unlikely to get it because most of us are very healthy,” Mehul Sharma, 19, psychology major, said in an on-campus interview Monday.

Though the virus does not generally appear to be a mortal risk to younger healthy students, they can act as a carrier to older adults and those who have compromised immune systems.

Many private campuses have closed their campuses to reduce the spread of the virus; most notably Stanford closed its campus due to having a faculty member who had contracted the virus.

“We should just transfer to online courses,” commented Tucker Crandall on the petition, another signatory. “Santa Clara University and Stanford did it; we shouldn’t support a viral outbreak by going to large gatherings when the CDC says avoid large gatherings.”

San Francisco State closed its campus starting through March 31, Sierra Community College limited access to its campus and UC Berkeley canceled most in-person classes starting Tuesday, according to the Berkelyside, their local newspaper.

The De Anza petition comes as the quarter closes and many students are preparing for finals.

Members of the FHDA administration have been strategizing on how best to address the online continuation of courses as the quarter ends in case of a potential shutdown of campus. As of this posting, the administration has no plan to close campus for the remainder of the winter quarter, and they continue to consult Santa Clara County health officials.

This is a quickly developing story and we have updated the article to reflect new information from Santa Clara County as well as recent updates from local colleges.

The following text is added to the article.

The County of Santa Clara issued a press release ordering the cancellation of mass gatherings. This does not include schools at this time.

San Jose State has announced the suspension of all in-person classes for the next few weeks in favor of switching to online classes but the campus will remain open.

La Voz has blurred the profile photo of the instructor.