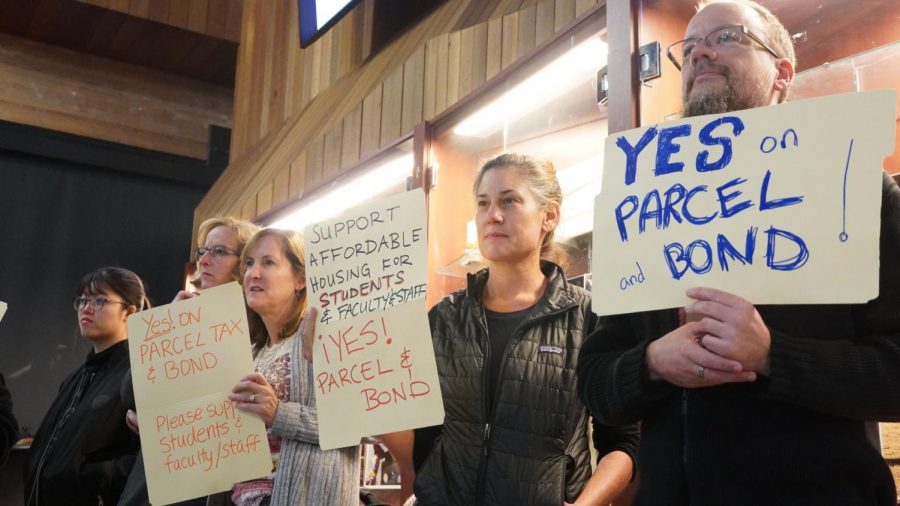 Faculty members advocate for a parcel tax measure on the March 2020 ballot.

The Foothill-DeAnza Board of Trustees unanimously supported a bond measure and parcel tax after students and faculty showed strong support for housing.

Several students brought signs with statements such as “Housing is a basic human right” and “parcel and bond and justice, yes, yes, yes,” urging the board to pass the bond and parcel tax measure.

The measure intends to issue nearly $900 million over the next 10 years, with approximately $180,000 being issued every three years.

The funds will be necessary if the board moves forward with a master plan which includes funding for campus upgrades and other resources for students including the potentiality for on-campus transitional housing for students and staff.

Ali Sapirman, 21, philosophy and public policy major, was one of the many students who provided public comment.

“We’ve been working on a housing campaign since last winter,” said Sapirman.

A potential location for housing on campus would be the parcel that currently houses the now-defunct Flint Center at De Anza which has been shuttered and will be demolished starting in 2023.

“Turning that Flint Center into housing, it’s morally the right thing to do. We have so many students who are struggling,” said Daniel Allen Solomon, part-time instructor of anthropology. “I mean, literally sleeping in the parking lot or would be if they could.”

Foothill College alumnus Alexander Shebanow, 29, documentary filmmaker and director of “Failed State” said he believes that providing on-campus housing with the funds would be a great idea.

“Housing costs in this whole region are just absurd and for students, especially ones who are housing insecure, it’s crucial that we provide some sort of housing,” said Shebanow.

While the purpose of the bond measure is intended for structural changes to the campus which may include upgrades to facilities and structures on the campus, the parcel tax is intended to assist in closing the gap between budget shortfalls and services the colleges provide including the potentiality for staff and faculty salary increases.

Patrick Ahrens, Foothill-De Anza Board of Trustees member, said he would like to take a particular focus on using the funds from the parcel tax for adjunct professors.

The “Educational and Teacher Excellence Parcel Tax” will increase taxes on parcels within the district by $48 per parcel.

The Board of Trustees must deliver the resolutions for both motions no later than Dec. 6 to the Registrar of Voters and the Board of Supervisors, according to the detailed agenda for the meeting.

Support from the Board included a written statement from State Assembly Member Marc Berman, who expressed his support for both the bond measure and the parcel tax.

The election will be on the ballot for residents from Palo Alto, Sunnyvale, Cupertino, and Los Altos, Los Altos Hills, Mountain View and Stanford. It requires a 55% approval rate to pass and the creation of a Citizen’s Bond Oversight Committee.

Student trustees of Foothill College and De Anza College Tiffany Nguyen and Genevieve Kolar made motions to pass the measure.  The bond measure, as well as the parcel tax, are projected to be on the ballot on March 3.