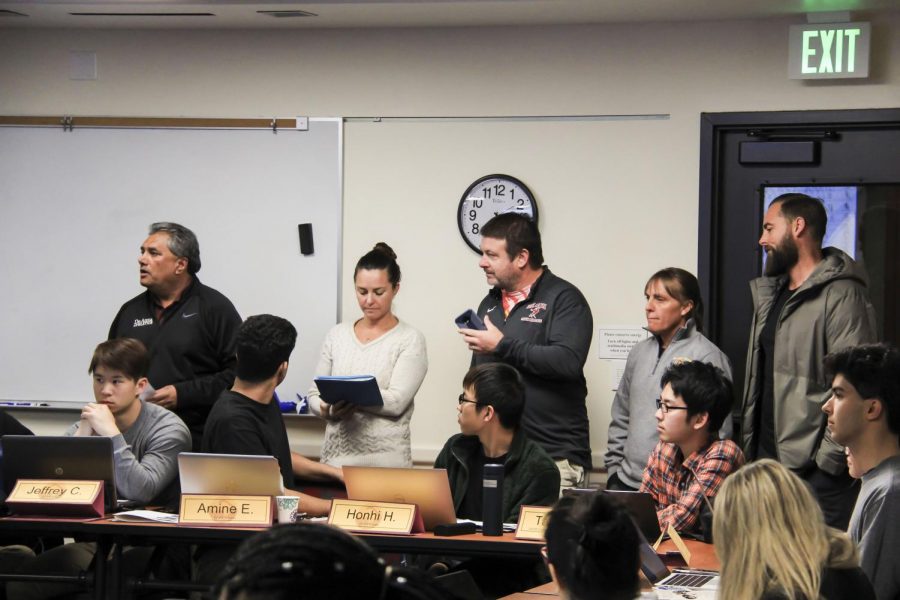 Athletic director Kulwat Singh, mens and womens water polo coach Danielle Altman and assistant athletic director Nick Mattis present a comment to the DASB senate about their thoughts on the budget cuts at the Feb. 6 meeting.

All De Anza athletics teams will experience cuts in their conference and travel expenses during the 2019- 2020 school year, after the DASB senate voted to allocate only $55,000 for the athletic department.

“The athletics staff and I are concerned,” athletic director Kulwant Singh said, “Where’s the money going to come from to pay (for the teams)?”

The DASB senate revealed its plans to decrease the athletic department’s funding at the Jan. 30 meeting. The reason, said chair of nance Ian Robertsson during the meeting, was to avoid being held financially responsible for the department.

“We don’t want athletics to depend on DASB alone to be able to operate on a daily basis,” said senator Angel Ryoko during the Feb. 6 meeting, where budget deliberations were further discussed, “We’re trying to give them a point. We shouldn’t be the only institution that they fall back on.”

Robertsson said that funding from the college and the ability to fundraise from outside sources could help sustain the department.

“Ultimately if we take away this funding they are going to go to the college and the college is going to have to decide, do we want athletes at De Anza?” said Robertsson, “I guarantee you they will say yes and they will help take on funding that we’re taking away.”

However, Singh is wary of having to rely on other sources.“The coaches and myself, we raise quite a bit of money,” he said, “But, how many times can we keep going to the well?”

A motion by DASB president Carolyn Nguyen to cut $5,000 more from the athletics department failed to pass during the meeting after the senate discussed the impact athletics teams will face.

“I think that $55,000 is really disproportionate to 400 students (athletes),” Nguyen said. “We can afford to cut here if we’re going to allocate other funding to other programs.The nance committee went into budget deliberations with the intent of not funding anything disproportionately.”

At the Feb 13. Meeting, a motion by Robertsson to move the $55,000 funding from the away game meals account to away games was passed. This would allow more exibiilty for the senate to discuss the athletics budget stipulations, which will occur at the Feb. 20 meeting.