IPBT continues to cut programs, teams due to the ongoing district-wide budget crisis 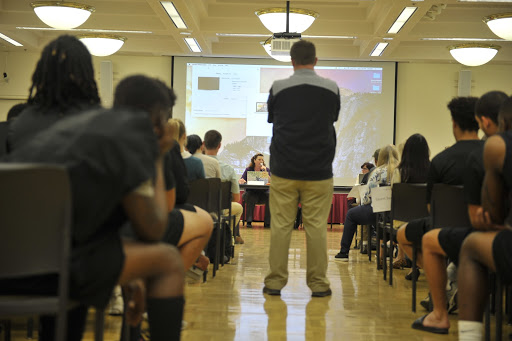 Football head coach Tony Santos stands in the middle aisle of the present onlookers with a majority of De Anza’s Football team present in the hearing of Football’s call to elimination.

The women’s water polo team and wildlife science technician program at De Anza have been approved for elimination by the Instructional Planning and Budget team during last week’s meeting on Oct. 16 after a report from the viability committee.

These recommendations were sent to IPBT from the viability committee after members reviewed and analyzed quantitative data such as fill rates, productivity and cost savings.

The football team was also recommended for elimination but was voted against by IPBT,  mostly due to qualitative data and testimonies such as coach Tony Santo’s powerful speech as his entire team took up most of the conference room A and B.

The nursing program was not recommended for elimination. Instead there was no consensus was during the meeting, and IPBT withheld voting for now as the viability committee needed more information.

Members from the nursing department still attended and spoke on the programs high success rate including a 100 percent success rate for obtaining work after De Anza such as with Mission Hospice and the 25 percent of nurses working there who came from De Anza’s nursing program.

The budget team still faces a deficit that still needs to be addressed and with these recent decisions, the cost savings from both program’s cuts only brought it down to about $2.35 million at most. They have until Nov. 1 to send their final recommendations to college council.

“If we don’t start making these tough decisions, someone else will,” said Eric Woodbury, chemistry instructor and faculty representative.