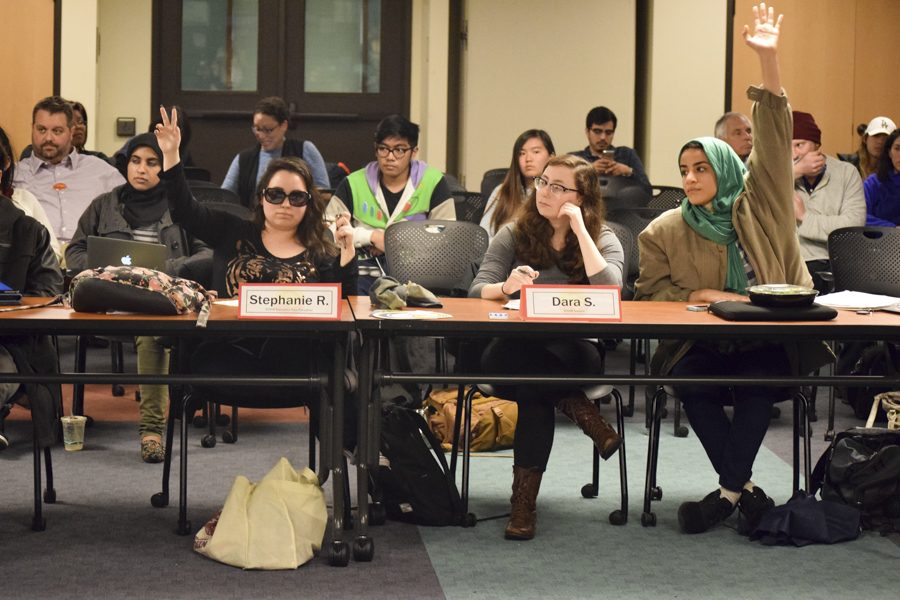 The DASB Senate passed a resolution advocating the Foothill-De Anza Foundation’s divestment from companies profiting from illegal Israeli settlements in the West Bank on Wednesday, March 15. The proposal, prepared by the De Anza Students for Justice club was presented a week after Israel passed a law banning anyone advocating divestment from entering the country.

The co-chairs of Students for Justice, Viana Lopez and Kenneth Gabbard, held a presentation about how many see Israel’s occupation of the West Bank as illegal under international law.

“During 2016 alone, 18 resolutions adopted in the general assembly of the United Nations and others in the Human Rights Council have all condemned Israel’s actions,” Lopez said.

She said that divesting is the neutral action and does not support either side in the conflict.

“By asking De Anza to divest, you are asking them to no longer take a side in this conflict that undermines a two-state solution,” Lopez said.

Lopez described the situation in Israel as “apartheid,” citing a report published by a United Nations commission earlier that day that stated “Israel has established an apartheid regime” against Palestinians. Most of the member states of the Economic and Social Commission for Western Asia that prepared the report do not recognize the state of Israel.

Lopez said the resolution would affect less than 0.1 percent of the foundation’s budget. According to the Foothill-De Anza Foundation’s annual report, their total budget was about $38 million in 2015.

The resolution was based off of a similar resolution that San Jose State University’s student government passed in 2015.

Former SJSU student Abid El-Miarri, who was involved in their campus’s divestment proposal, noted that the movement started as a request from the Palestinian people.

Concerns were raised by members of Hillel of Silicon Valley that passing the resolution would increase anti-semitism on campus.

The vote passed 12-1, with four senators abstaining. DASB President Matthew Zarate was the only dissenter.

Zarate said he wanted those opposing the resolution to have time to prepare a presentation and explain their view, as was done with the Measure B discussion last year.

“I think it would have been more fair if we had a chance to present,” Berman said.