Election stress is at a 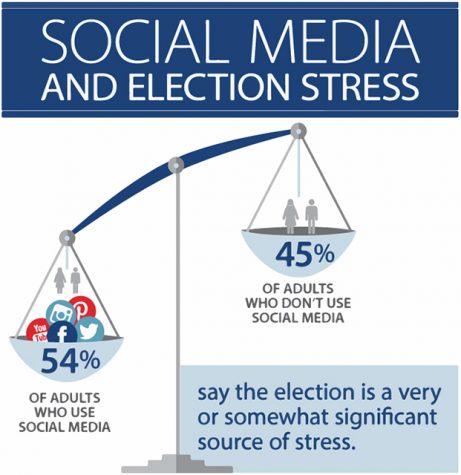 n all-time high, with more people feeling the effects of a tense presidential race than ever before.
A study from the American Psychological Association found that adults feel the election is a significant source of stress.
De Anza’s campus isn’t exempt from the wave of teeth grinding news cycles, warring social media and family tensions, which all work together to strain students who already have a lot on their plates.
International students Yuming Wang and Yiming Wang (not related) said they were concerned most about the outcome of the election affecting their ability to live and work in the United States.
“I worry about us as international students, visas are really hard to get,” Yuming Wang said.
Their concerns surround how laws could change and make it harder for immigrants to find a home.
“As an immigrant, it’s harder than it was in the past,” Yiming Wang said.
The APA published tips and tricks to relieve election stress, advising a reduction in media consumption, and to “read just enough to stay informed.”
Students are feeling the effects of the election, said De Anza student Diego Robles, but especially people of color.
“The sense of racism has become stronger throughout the nation, and fear of its acceptance as well,” Robles said.
He said he thinks about it everyday because the outcome will affect him directly, and that the outcome scares him “no matter who wins.”
Justin Russell said he especially feels the effects of the election on social media, not with strangers, but with his mother, who is a Republican voting for Trump. Russell said he tries to get people to see both sides, but “when people are one-sided or extreme, I get stressed about it.”
When something hits close to home, the effects can be even worse. “I had an anxiety attack after receiving a disturbing message from my mom,” said Russell, who wishes people would try to understand others, no matter where they’re coming from.
“It’s basically a feeling of dread,” said Lisa Stefanko, who isn’t feeling confident in either candidate. “It’s caused tension in my family because my parents are likely voting third party, and I’m more interested in voting Hillary.”
The APA encourages people to “channel your concerns to make a positive difference on issues you care about. Consider volunteering in your community, advocating for an issue you support or joining a local group.”
It may not be long before Nov. 8, but the draining, polarized process of the election may make it hard for students to look forward to the next one.