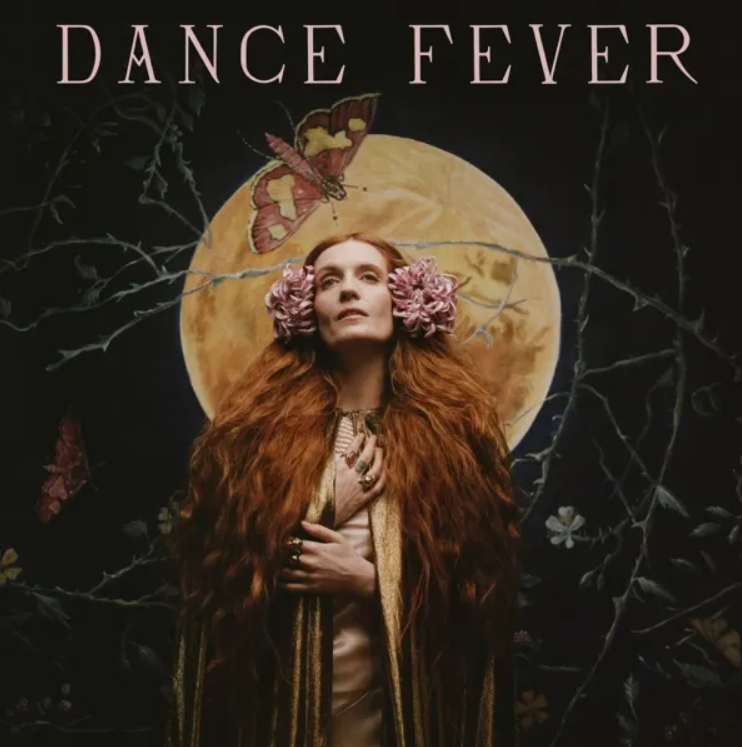 Florence + The Machine, an indie rock band led by singer Florence Welch alongside eight other band members, have returned with their fifth full length studio album “Dance Fever.” The project is packed with stunning vocal performances and introspective lyrics.

The album opens with the song “King” which is all about breaking free from gender stereotypes.

The lyrics are backed with a strong vocal melody and instrumentation that is subtle and powerful at the same time. The song builds up with louder instrumentation as it goes across its 4 minute run time, as if to represent Welch gaining confidence as the song progresses.

“King” is followed by the song “Free,” which features an almost disco sounding drum pattern. Welch’s vocal melody on the song is extremely catchy, and the track has a groove that when you hear it, you can’t help but dance.

Another moment on the album like “Free” is the song “My Love.”

This track has a stunning vocal performance paired with my favorite production on the whole album. The song sounds like if indie rock was made for nightclubs, and has that same disco element that was featured on “Free.”

“Free” and “My Love” stand out on this album as most of this album relies on subtlety and songwriting.

The track “The Bomb” is a guitar ballad with occasional drum hits where Welch sings about having an attraction to all the negative aspects of love.

Welch sings, “I don’t love you, I just love the bomb. Buildings falling is the only thing that turns me on.”

The song feels like a commentary on toxic couples.

“Cassandra” has Welch deliver her most angelic vocal performance on the entire project. The song mixes the subtle and upbeat elements of the album in a compelling way. While having an uptempo drum beat, the song still sounds dark and evil.

During the runtime of “Dance Fever” there are three interlude songs that appear a bit hit or miss. “Prayer Factory” and “Restraint” add little to the project and feel like unnecessary detours.

However, the track “Heaven Is Here” is a favorite on the project despite its short 1:51 run time. The vocals and vocal melody are stunning and the song has the most experimental song structure on the project, and leaves you wanting more from it.

The songs “Girls Against God” and “Morning Elvis” have very personal lyrics and, from a songwriting perspective, they are great. However sonically, these songs come off ‌uninteresting.

“Daffodil” and “Dream Girl Evil” are other highlights from the project. “Daffodil” is the most unique sounding on the project — it features distorted drums that take influence from industrial records.

Overall, the album is a solid addition to the Florence + The Machine discography. Across every song, the vocals are amazing and hardcore fans of the band will appreciate how introspective and personal the lyrics are.