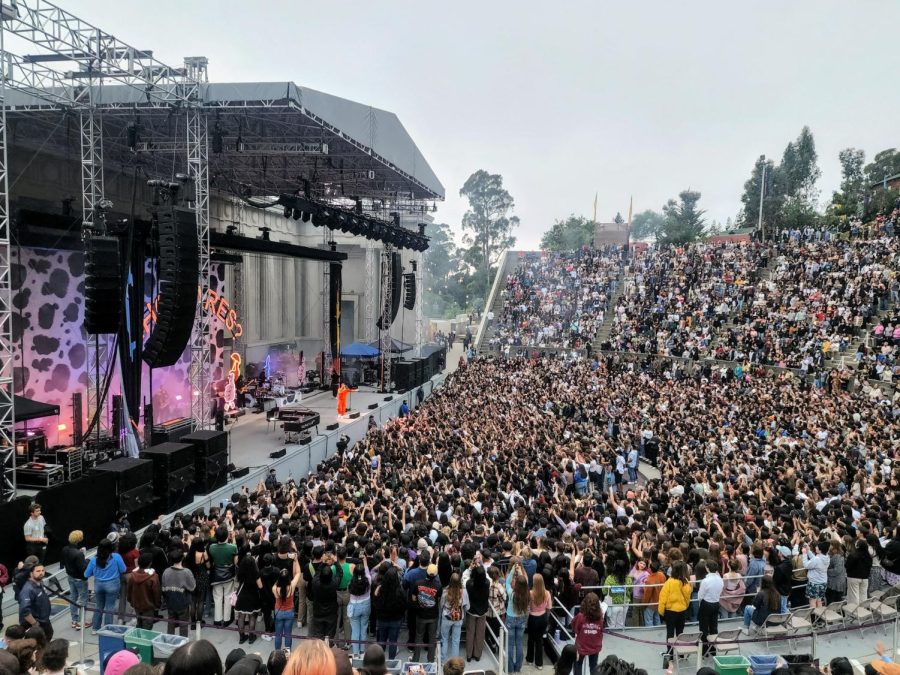 In his first show in the Bay Area since January 2021, Rex Orange County plays to a sold out concert at the historic Berkeley Greek Theatre.

Rex Orange County amazes in his first Bay Area show in over two years, bringing all of the energy to Berkeley.

The indie pop artist from England is coming off of his fourth studio album “WHO CARES?” that was recently released in March. Lines formed ‌quickly as the line stretched out over half a mile before the concert began.

The best part about a Rex Orange County concert is how accurate the songs sound to the studio versions, with the band subtly improvising at times.

To say Rex’s band was amazing would be an understatement as the horns sounded absolutely incredible and the drummer, Jim Reed—who sported an Oakland Athletics hat—really brought it and shined onstage.

The concert started ten minutes after the advertised time and lasted for a little over an hour and a half. The 22-song setlist was composed mostly of his latest album, playing nine of the eleven tracks, but Rex also plays songs off of his three previous albums including some solo hits such as “Best Friend,” “Sunflower” and “Loving Is Easy.”

The only critique would be that songs such as “ONE IN A MILLION” that drive a heavier bass line aren’t amplified as much as they should be. I was expecting to hear a heavier bass sound during the performance of the song.

But the Berkeley crowd definitely brought the energy too, as it was completely packed with concert-goers heading to the grass section at the top of the theater.

Rex is a very versatile performer and knows how to show off his talent, transitioning from playing piano to keyboard multiple times throughout the show while throwing in some dance moves.

“I love you so much,” said Rex as he walked offstage after his final song. “We will see you next time.”

Rex and his band really showed out for the Bay Area, and it was great to be there. Those who are interested in seeing one of the bigger names in indie pop should definitely give him a listen.

If you get the chance to see him live, definitely do so… just get in line early.