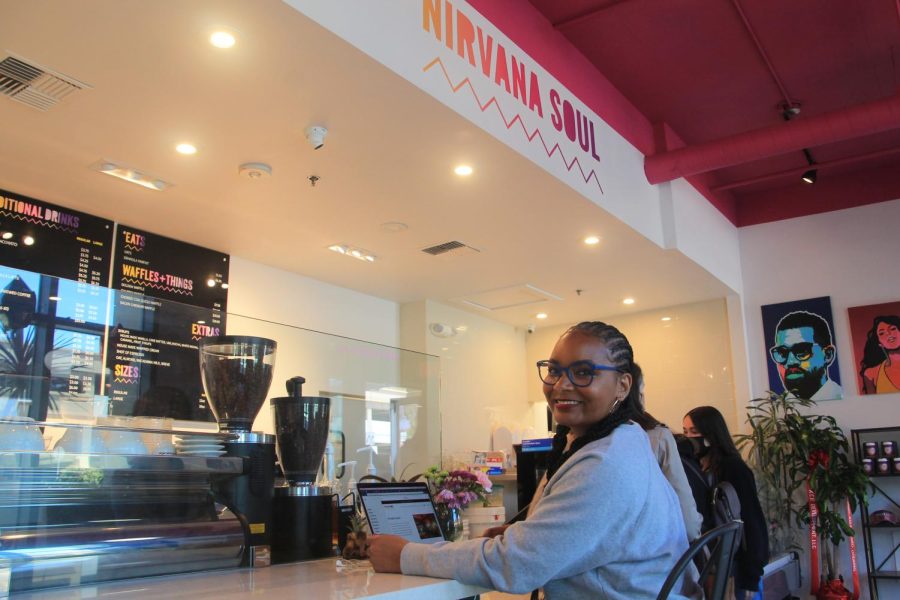 Nirvana Soul cofounder and CMO, Be'Anka Ashaolu, at the new location in Cupertino.

Nirvana Soul is a black-owned business that was first opened in 2020 in downtown San Jose inside the SoFa district. The owners and sisters started with the creation of a blog where they related their journey to becoming business-owners. By its opening, their blog and social media already acquired over 3,000 followers that eventually became customers.

Be’Anka Ashaolu, co-owner and CMO, is a San Jose resident and the middle of three children. She still has her day-job in the tech field, and works on her and her sister’s business part-time, handling the company’s social media. Her older sister and CEO, Jeronica Macey, has over 20 years of experience as a barista and is seen more often at the shops.

Ashaolu said the sisters have always wanted to expand and that it is their goal to eventually open twenty shops across the United States. Within two years of the downtown location’s opening, she said that a real estate brokerage contacted them and informed them of the availability of the new Cupertino location.

“That was a serendipitous moment,” Ashaolu said. “My sister went to look at the place and she loved it. We all agreed this was the perfect place for us.”

Tykiesha Williams, a barista at Nirvana Soul, started working for the company a month before the Cupertino opening. Before, she had worked at Starbucks for seven-plus years where she became a supervisor. She said she had been following Nirvana Soul on social media before and that she was inspired by the two sisters’ journey.

“I love coffee, I love serving the community and I love making people happy,” Williams said. “Coffee brings people together more than a lot of people think and that’s what I love about the environment here. It’s like we’re a family.”

Ashaolu said that on top of building the company, she and her partner also want to have a good experience despite the many challenges that come with running a growing business.

“The pandemic was a dark time for many, and we tried to give people a little bit of light.” Ashaolu said. “Some customers would only leave their house to come here and that’s something we take seriously.”

Matthew Rose, an avid customer of the coffee shop, first heard about it through social media and quickly became a regular at the downtown location. He has since switched to the Cupertino location because it is closer to his home.

“It’s different from other coffee shops,” Rose said. “It’s unique, community-driven and they have great coffee. Also, I love the artwork, ambiance and decor.”

In that vein, Ashalow said that she wants the locations to feel like an art gallery, a decision inspired by the fact that their first location is in the SoFa district which is known as the city’s arts, culture and entertainment neighborhood. She said the shops are already booked for this year’s exhibitions, which change every three months.

“The beautiful part about it is that most of the artists are women and people of color and for many it’s their first time exhibiting their artwork,” She said. “I think putting ourselves out there makes others feel more safe and comfortable to do the same.”

Ashalou said that she’s thankful to her customers who have supported her and her sister along their way.

“It’s amazing the love that we get and it’s what drives us forward,” She said. “Whenever we have a hard day we keep going because we know that we are contributing to something bigger.”