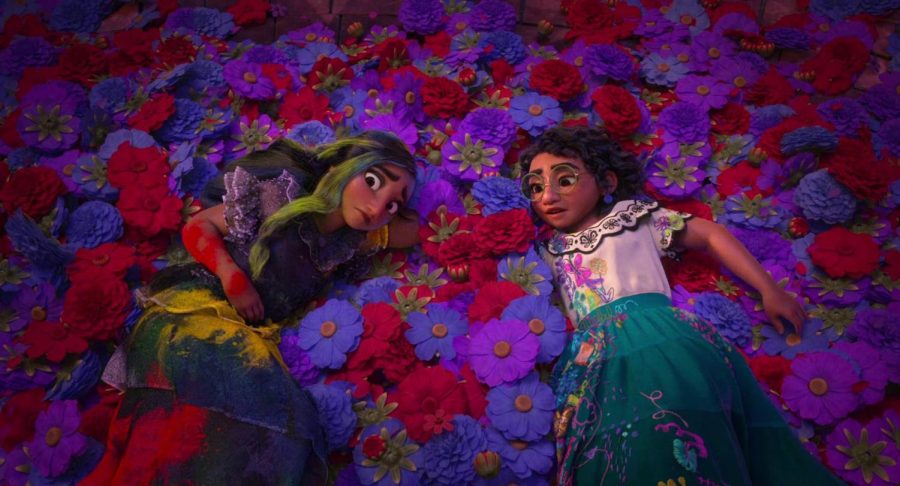 Disney’s newest animated film “Encanto” is an eye-catching and energetic film with a refreshing plot centered around emotional healing and family. Although the film targets children, it succeeds at entertaining audiences of all ages.

The film tells the story about the Madrigal family, located in Columbia, where every member receives the gift of magical abilities when they turn the age of five. The protagonist of the movie is a young girl named Mirabel, who is the outlier of the family when, upon her fifth birthday, she fails to develop any abilities, unofficially deeming her a failure.

However the gift in her family is thrust in danger, and now Mirabel must figure out how to save it. The movie follows her as she helps each member of her family figure out why their magic is in danger.

“Encanto” highlights many themes about family, forgiveness and healing through its use of multiple musical numbers and fast-paced plot. At its best, the movie shows the power of embracing one another and overcoming personal struggles, making the audience want to do the same.

The songs of the film were very meaningful and provided elaboration on character arcs. The characters’ thoughts are expressed during different points of the film, with singing, such as in “Antonio’s Voice.” Along with that “We Don’t Talk About Bruno” also spotlighted deep cultural history.

While this is an excellent decision in targeting young audiences, at times it felt like the pacing slowed down excessively.

My favorite song of the movie was “Waiting On A Miracle” because it highlighted how you shouldn’t be mad or upset with the way things go. Instead, you should try to accept and live with it. Not everyone is gifted with the same talents or circumstances.

“Encanto” was colorful, well put together and well thought out. A film sure to make you embrace family and teaches you how to be resilient, believe in yourself and never give up.