“Venom: Let There be Carnage” is a sequel that capitalizes on the originals positive traits1 min read 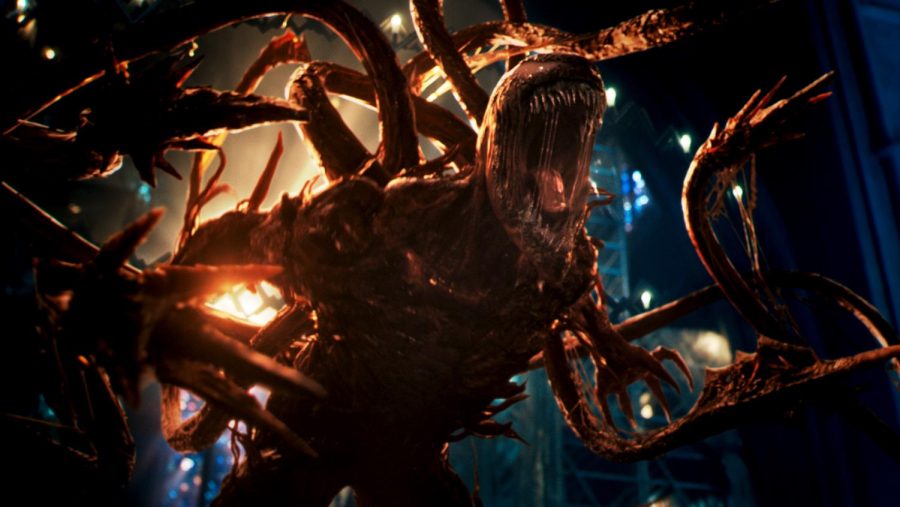 “Venom: Let There Be Carnage” manages to build off of the positive traits of the first movie, with more relationship building between the main characters, funny comedy and a menacing villain’s first live action appearance.

Directed by Andy Serkis, “Venom: Let There Be Carnage” follows Eddie Brock (Tom Hardy) and Venom as they struggle to live with each other. But when serial killer Cletus Kassidy (Woody Harrelson) breaks out of prison, they must put aside their differences to save the city.

Tom Hardy returned with a good performance as the lead with having to talk to himself most of the time; playing into the comedic elements of the movie.

With an hour and 26 minute runtime, the movie never loses the audience’s attention.

However, the movie would have benefited from an R rating over its PG-13 one and use the “Deadpool” blueprint, a comedy with more brutal action, because the characters in the comics are on the darker side.

Woody Harrelson would have benefited from the aforementioned rating as he could have played more into the crazy serial killer role he was given and made his villain one to be feared.

“Venom: Let There Be Carnage” does a good job of building the main characters from the original, giving a classic CGI fight climax and good laughs making it enjoyable for fans of the original.

Be sure to stick around for the mid-credit scenes for a surprise that will leave you smiling out the door excited for what is to come in the franchise.