“I Care a Lot” does not care about predictability2 min read 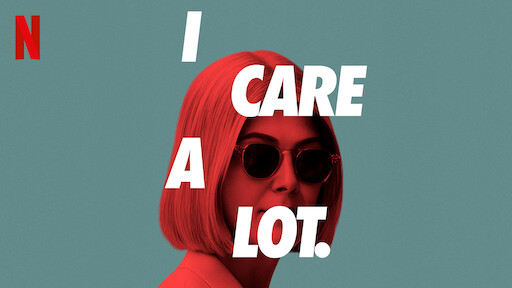 The Netflix psychological thriller “I Care a Lot” instantly attracts its audience through unpredictable twists, leaving the audience excited to see what happens next.

The film follows the main character Marla Grayson (Rosamund Pike) who’s a money-hungry court-appointed guardian who forces her elderly clients into care homes and swindles them out of everything they have.

With her corrupt business thriving, Marla thinks she’s hit the jackpot with her newest client Jennifer Peterson (Dianne Wiest) who’s claimed to have no living family and a whole lot of cash.

However, everything changed when she found out this old lady is secretly connected to a powerful gangster, Roman Lunyov (Peter Dinklage).

Throughout the film, I was shocked by the corrupt and scandalous characters. Just as you think you have a grasp on what’s going on, things get even crazier.

Rosamund Pike and Peter Dinklage do a phenomenal job diving into their roles as desperate yet powerful beings, belonging to two totally different worlds.

The director also uses different settings as a way to symbolize control. Jennifer getting trapped in a care home showed she had little power in the situation compared to Marla.

As prideful Marla faces off with gangster Roman, the story emphasizes how you will do whatever it takes to be on top but also do whatever for your loved ones.

The creators of this film not only focus on unethical practices but they also highlight the potential abuse and danger elderly patients may face.

These unpredictable scenes not only play with your mind but with your emotions as well. You will be shocked by the end of the film, once karma takes its toll.

Everything about this film made my anxiety fly through the roof, but in a way where I didn’t want it to stop.

If you enjoy psychological twists, this film is for you.