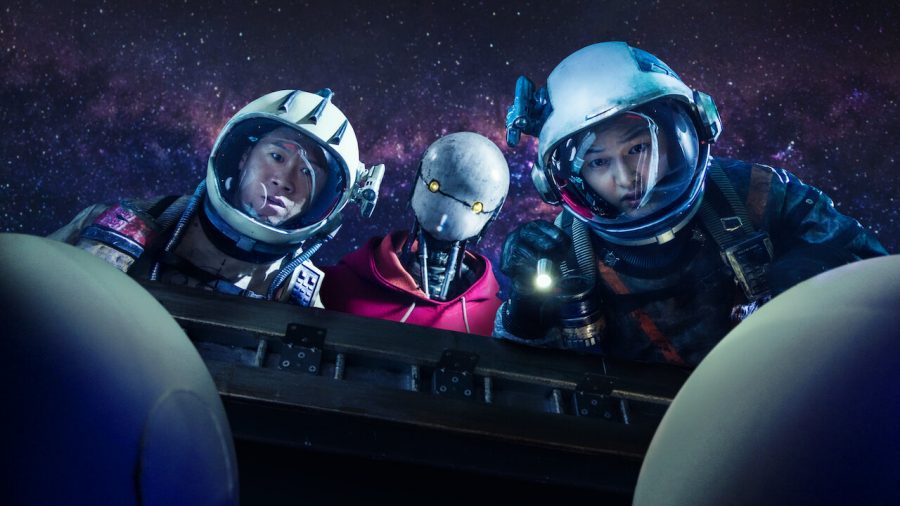 South Korea’s first high-budget space opera “Space Sweepers” is a fun adventure through dystopian space — but nothing special.
Directed by Jo Sung-hee and released on Netflix on Feb. 5, the film follows Kim Tae-ho (Song Joong-ki) and his crew on their ship as they travel outer space in 2092, hunting for space junk to pay their next bill. A robot named Bubs (Yoo Hae-jin) follows the crew and comes to life with fluid movement.
By chance, they come across a small child named Dorothy (Park Ye-Rin) who is a weapon with a high market value.
The main cast does a great job portraying their characters. They all interact well, making you believe this ragtag group is a real family.
The world is fascinating. The vast depths of space, the crowded ship ports and the interior of the Victory give you a sense of the dirty, trash-filled future.
The CGI contributes to this. Ships with claws and grappling hooks search stars for scrap, participate in dog fights and maneuver through tight corridors in the vastness of space.
Unfortunately, the film falls flat once you get to the story. It’s not terrible but does not stand out from other action films.
The UTS, a corporation that is all-powerful in this world, is led by James Sullivan (Richard Armitage). His performance is great, but from the introduction, it becomes painfully obvious that Sullivan will be the antagonist of this story and head the big evil corporation.
This is in almost every iteration of the dystopian future film.
The idea of a class struggle is even generic: the UTS space colonies’ paradise and the wasteland on Earth meant to show the divide between the two classes and to motivate the lower-class characters to take down UTS.
The subpar humor is another downside, either getting a slight chuckle from Bubs’ money-hoarding or dead silence during the poop or fart jokes sprinkled throughout the film.
Overall, the film is not much of a surprise in plot and setting compared to other films within genre. Still, if you have Netflix and are looking for a simple movie that looks great and has entertaining action, “Space Sweepers” is a good watch.
And watch it in the original Korean audio. You will thank me later.