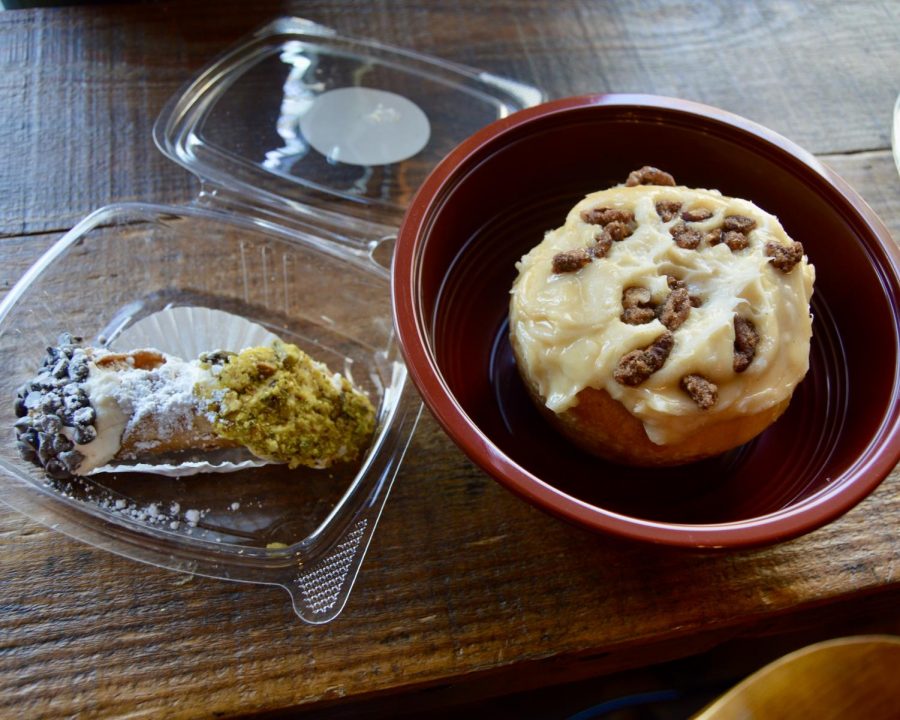 (Left) Cannoli coated with chocolate chips and pistachio flakes and covered with powdered sugar. (Right) A cinnamon bun topped off with walnuts.

In 2013, when Jamie Whitmire decided to pursue her passion for baking, she opened up her food truck selling cannolis and cupcakes. Seven years later, Whitmire turned Holy Cannoli into a brick and mortar restaurant in downtown San Jose.

“I learned how to make cannolis when I was young and then I just had this vision come to me because no one was doing that down here,” she said. “Everyone was opening fro-yo shops and I thought, well if those guys can do that, I can do the same thing with my cannolis.”

Not only does Whitmire aim to provide high quality cannolis, cupcakes and savory foods, but she also sees her restaurant as a stepping stone in community rehabilitation.

Holy Cannoli hopes to help those from troubled backgrounds get a second chance through career building by teaching them the ins and outs of what it takes to be a professional chef.

“All it takes is one person to believe in you and change your life,” Whitmire said. “When people like me are willing to give others a chance, all of a sudden this person has a resume, they’re learning on site skills and they can take that to their next job.”

The restaurant is not only unique in being one of the few that sells cannolis, but also believes in always adding a twist to the ingredients.

“You can look up a cannoli recipe anywhere. It’s pretty simple but I wanted to add my own flair by bringing different flavors together, such as limoncello and Kahlua,” Whitmire said.

Many customers come in and say that they have never tried a cannoli before and said that it was a unique concept, said Whitmire.

Alan Hsing, 20, an aerospace engineering major at San Jose State University said “I’ve never seen a cannoli place before and I wasn’t sure what to expect but I was surprised at the richness of the cream and the crispiness of the shell. It wasn’t too sweet and I’d definitely come back.”