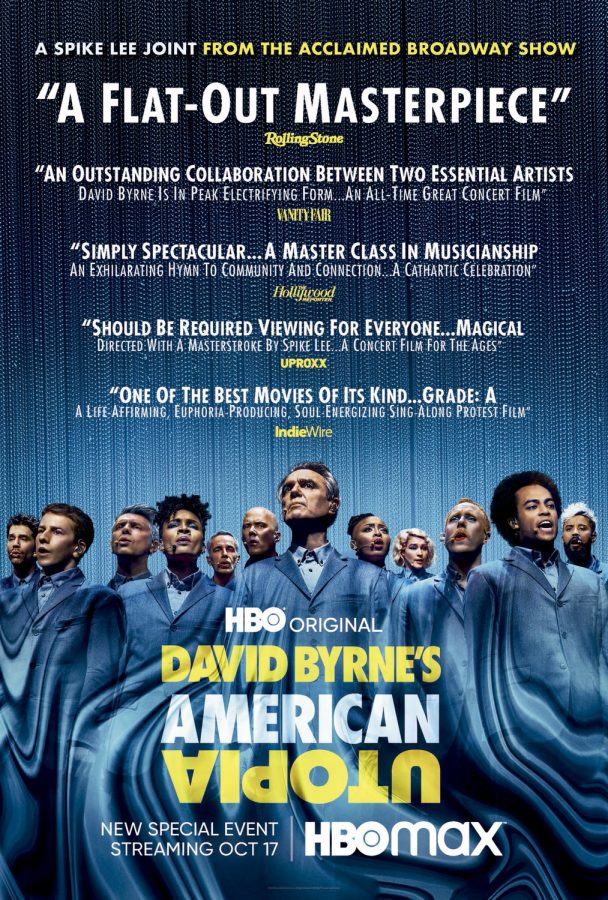 At the top of David Byrne’s newest concert film, “American Utopia”, he sits center stage contemplating a plastic model of a human brain. What follows is the beautiful marriage of music, artistry, movement, civic engagement, performance and cinema.

More than just a spiritual sequel to his 1984 concert film “Stop Making Sense,” which is still held today as one of the pinnacles of concert filmography, American Utopia goes beyond the former by weaving a narrative throughout Byrne’s music and engaging the audience in thought.

The show ran on Broadway’s 2019 season at the Hudson Theatre.

Upon attending the pre-Broadway run in Boston, director Spike Lee approached Byrne with the concept of the film immediately after the curtain dropped. With both artists on board, they brought their film to this year’s festival circuits.

Selected for the closing week as part of the 58th New York International Film Festival, I was lucky to catch the premiere as it played on the Film at Lincoln Center’s virtual cinema website due to COVID-19 restrictions.

With Byrne running around the stage alongside his robust 12-member band all donning matching grey suits and bare feet, the show feels as if it’s a mere celebration of existence but is in fact so much more than that.

One song stood out in particular as the emotional climax of the film: a cover of Janelle Monáe’s “Hell You Tom Bout” which Byrne introduces as “a protest song that’s also a requiem, a song about [the] possibility for change not just in the world out there but in myself.”

Spike Lee’s cinematography drives home the emotional impact of this number as he crosscuts the performance with family members standing center stage, holding larger-than-life photos of the loved ones they have lost to police brutality.

The film is thought-provoking and brings along a beautiful message about the hope of change while getting Talking Heads fans out of their seats and on their feet, dancing and singing along.

This film offers a joyous experience that seems quite appropriate with our country facing a looming election in the weeks to come. This message of hope is beautifully brought to the fore as Byrne states, “Despite all that’s happened, and despite what’s still happening, there’s still possibility.”