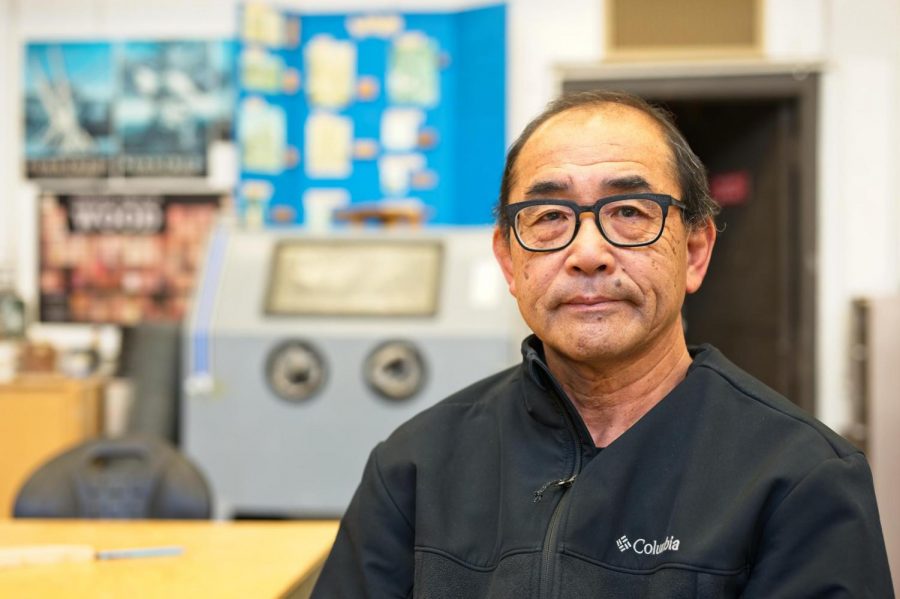 Seven years after starting his project, 3D design instructor Moto Ohtake watched as the crane finished putting together the final pieces of his 40-foot-tall sculpture.

Installed in Nov. 2019 at San Francisco Central Subway’s new 4th and Brannan surface station, “Microcosmic” consists of 33 individually moving parts that spin and twist in the air, reacting to the whims of the wind.

It is just one in a series of kinetic sculptures Ohtake has created and installed across the world, from Dublin, Ireland, to Tokyo, Japan, to upstate New York.

Born in Tokyo in 1952, Ohtake grew up in Yokohama, Japan. He knew as a child that he wanted a creative career when he grew up.

“I knew that if I do something in the future as a profession, I would want to do something that I can use my hands and also eyes,” said Ohtake. “I can see things that or I can imagine things that I want to make.”

He moved to the U.S. in 1976. After attending the Academy of Art College in San Francisco and receiving a Master of Fine Arts from the San Francisco Art Institute, he moved to Santa Cruz in 1985.

This sculpture started in 2012 with a proposal he created detailing his plan for its creation and installation, but he said he has been creating similar sculptures for almost 20 years.

Ohtake’s time at De Anza College started in 1991 when he was hired as a lab technician, a position he held until 2005 when he became a full-time instructor. Ohtake currently teaches 3D design, but has also taught sculpture and furniture design in the past.

Teaching students helps him exercise his creativity outside of working on his own art. Looking at their artworks and giving suggestions is “very stimulating, because I’m using my imagination too, to help them,” Ohtake said.

His greatest hope for his students is that they come out of his class with a more imaginative approach to their art, he said, in addition to their understanding of different materials and techniques to create their art.

In his own art, Ohtake finds the greatest inspiration from nature, both on a microscopic and macroscopic level.

“I think it’s interesting to see the connection between micro and macroscopic worlds,” he said. “If you take a look at the forms and shapes that you can find, you’ll see a lot of similarity there.”

In creating his art, Ohtake said he tries to create a self-contained universe and enjoys the physical aspect of sculpture and other hands-on media.

He aims to express this affinity in his pieces, whether it is the dancing of dozens of metal figures in the wind or the explosions of shapes and colors that bound over the edges of his collages.

After seeing the seven-year process for “Microcosmic” end, Ohtake said he plans on continuing with his work, whether on his kinetic series, another series of smaller hand-activated pieces or another project altogether.

“As far as I can see I’ll be busy doing all that,” Ohtake said.