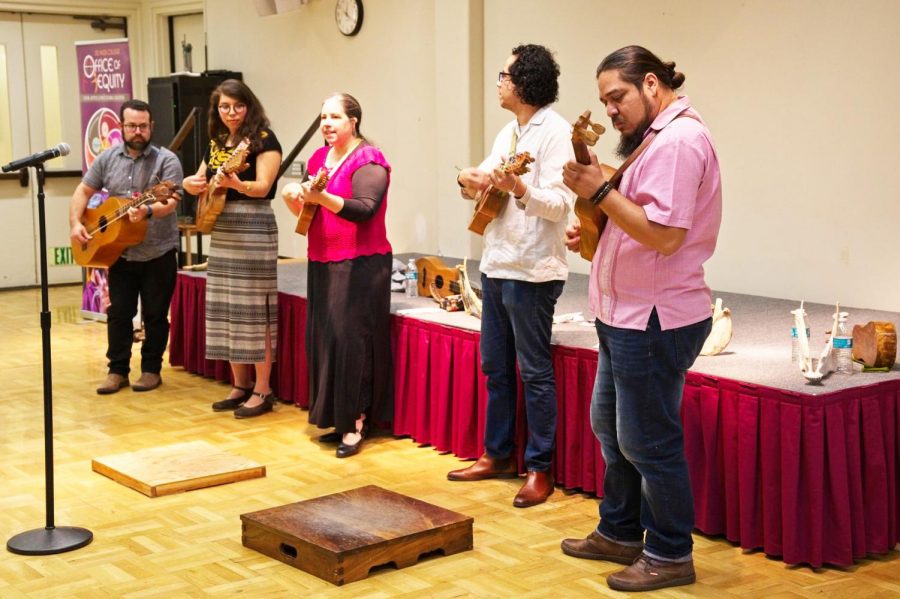 The walls of the De Anza Hinson Campus center embraced the spirited melodies of the traditional art form Son Jarocho, a blend of African and indigenous Mexican music on Feb. 11.

The main aim of the performance was to spread awareness of Son Jarocho music and unite the three quintessential roots of African, Spanish-Arabic and indigenous Mexican cultures.

The concert, held in celebration of Black History Month, supports the traditions and rich history.

“Son Jarocho is a place to be whole,” said Maria de la Rosa, the artist and spokesperson of Día Pa Son ensemble. “It’s a place where I’m sharing something in common with people I don’t necessarily know,”

In a two-hour performance, Día Pa Son artists captured the audience’s hearts through passionate and improvised narratives of Son Jarocho’s history through music, voices and tarima, a wooden platform for dancing.

Lilia Venegas, 24, biology major, said that even though she attended the event as part of a class assignment, she stayed until the end because she wanted to see more of the performance.

“I loved the dancing the most,” said Venegas. “How they used the tarima to add in to the music. The way they were dancing and doing the footwork and moved to the rhythm of the beat was really nice.”

To commemorate the roots of the art form, the ensemble performed songs to show each of the three cultural elements that make Son Jarocho what it is today: indigenous, African and Spanish.

The art form of Son Jarocho blends the styles of three different cultures, but welcomes a diverse community of performers to learn about the culture.

Mike Gubman, Día Pa Son artist and Chicago native, said that despite not being part of the culture in the first place, the improvisational style and fascinating rhythmic verses drew him into the art form.

The practice of Son Jaracho music by maestros and artists today aims to bring visibility to, as well as combat the erasure of, Afro-Latinx and indigenous Mexican cultures. As Son Jarocho continues to express multiculturalism, the Día Pa Son ensemble aspires to bring acceptance and unity regardless of one’s cultural identity through their performances.