“The Mind of Aaron Hernandez”: a dark dive down into a murderer’s thoughts and your own values2 min read 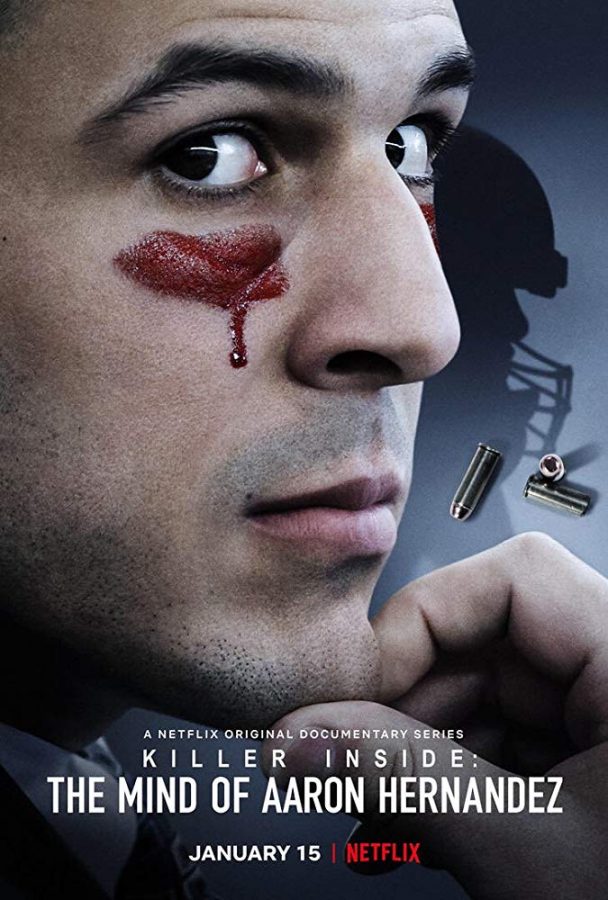 Watching the original Netflix documentary series, “Killer Inside: The Mind of Aaron Hernandez,” feels like standing in his desolate jail cell with him, consumed by his violent emotions over being accused and convicted of murder, separated from his family and football career.

In order to pinpoint how Hernandez morphed into a killer, the documentary begins in Bristol, Connecticut, his home town, and follows his journey toward becoming one of the most watched and cheered for players in the NFL.

The film crew interviewed Hernandez’s teammates, journalists, and childhood friends who all described him as a determined player whose spark destined him for greatness. You initially gain a general sense of trust in Hernandez, feeling the panicky elation he must have experienced when he was drafted.

However, interviewees describe how Hernandez, outside of football, puffed up his chest and acted like a tough guy who couldn’t be hurt by anything.

This caused him to act out in fits of rage that seemed disproportionate to what he was getting mad about. An uneasy feeling of distrust begins to form in your chest: a gut feeling that even though you know Hernandez is going to go downhill, you still root for him.

The jury ultimately decided to convict Hernandez of a brutal execution-style murder in the first degree.

This is something that I especially loved because it places you in a morally gray area that depicts the conflict that Hernandez and those affected by him must have felt.

The murder is introduced first with the victim, Odin Lloyd, a semi-pro football player known by Hernandez through his fiancé, since Lloyd was dating her sister.

Lloyd was adored by all that knew him, which makes you feel even more conflicted over the case. I appreciated how the series showed compassion and empathy toward the victim because in cases where celebrities commit crimes, the focus remains on the celebrity.

The only issue that I take with the series is the failure to identify a clear motive for why Hernandez committed murder.

The series instead speculates about Hernandez’s sexuality and the possibility that being gay and being surrounded by hypermasculinity caused enough tension in him to commit murder.

This, while a possible factor, dominates multiple interviews in the series and seems a bit exploitative of identifying as queer.

You see the vast amount of pain people on both sides of the argument are going through. It makes everything seem more human, like it could’ve happened to you.

The series leaves off on Hernandez’s suicide and its after effects, causing you to feel emptiness over the persisting conflict with your own morality, and is definitely worth watching.