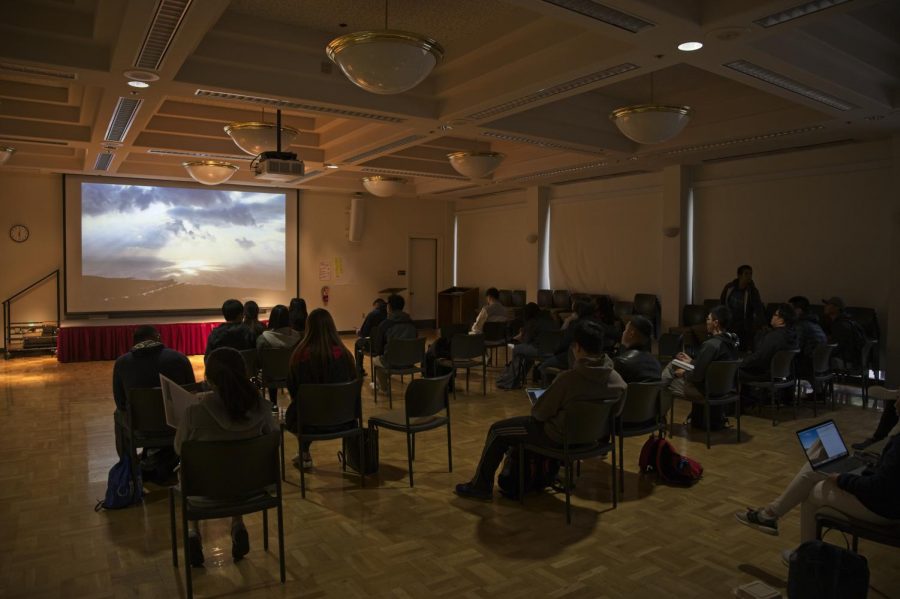 Students view a screening of "The African Americans: Many Rivers to Cross" in the Hinson Campus Center on Monday, Feb. 25.

De Anza College students got a glimpse into the tragic and triumphant history of African Americans during Black History in the Cinema, held on Feb. 25 and 27 in the Hinson Campus Center.

The first two episodes of the PBS documentary series “The African Americans: Many Rivers to Cross” with Henry Louis Gates Jr. were shown at the event, hosted by the black faculty, staff and administrators network at De Anza.

Covering the history of Africans and their descendants in America from the beginning of the slave trade to the start of the Civil War, the episodes focused on individual stories as well as historical context to explain and explore the roots of black history in the country.

Event host Sheila White-Daniels, dean of Counseling and Student Success, said the event was organized to help students, and the public, better understand African-American history and where it began.

“I hope that they learn what’s beyond what they’re getting in books, and that they understand the reality of how we’re all more similar than we are different,” she said.

Orion Liu, 18, computer science major, attended the event because her political science professor offered extra credit, but she said events like this were important because people should understand and remember history.

“Learning about the tragedies of the past is important for people to treat different races with equality today,” she said. “It’s especially important for America because democracy, liberty and equality are core values of American policies.”

White-Daniels said she hopes to show the remaining four episodes of the series in the future. The dates for these showings have not yet been determined.