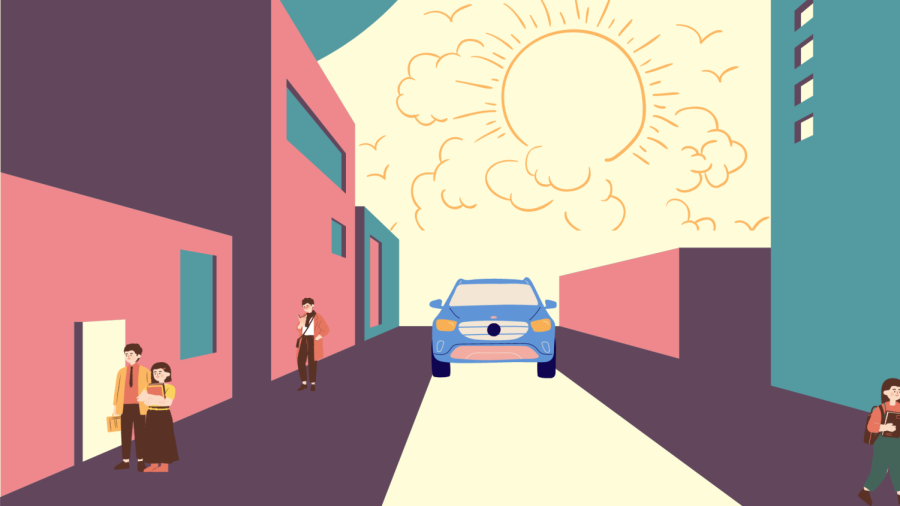 When the pandemic hit, unhoused students were thrown to the wolves as they had to suddenly recalibrate how they lived their day to day lives as everything shuttered down.

K.D. sat in the dark. She lived out of her car, conserving the batteries in her phone and laptop for as long as she could until they both finally ran out. Then, she would just wait—she had nowhere to recharge her devices, and thus she had no way of getting information from the outside world.

“If you live in a house, and your phone or laptop doesn’t work, you still have the radio and the TV,” K.D. said, 57, web design major. “But I didn’t have that—those two devices were my only mode of communication.”

K.D., who had been attending De Anza for almost two quarters by that point, couldn’t even go on campus to charge her devices due to the 2020 shutdown in response to the COVID-19 pandemic. On top of the personal stress she faced, K.D. was barely able to finish her schoolwork in time for the end of the quarter.

“I couldn’t do homework, do my projects, or study for my finals because I had to conserve electricity,” K.D. said. “I thought, ‘If this pandemic keeps going, there’s no way I can continue taking classes.’”

She reached out to the interim president of De Anza for help and got no reply. Instead, her email got forwarded to the head of the computer science department, who still could not solve the problem.

“In all of my emails to the staff, I asked if they could just allow me to park in one of the covered parking spaces and give me access to an electrical outlet out there,” K.D. said. “I wanted to charge my devices and I needed Wi-Fi to do my homework, but they wouldn’t let me do it.”

The only moment of relief came in the form of a school-wide policy that exempted students with all A’s from having to take the finals in their courses.

“Luckily for me, I got A’s throughout all of my midterms and all of my homework, and so I didn’t have to do the final,” K.D. said. “Otherwise, that would have been a huge problem.”

Though K.D. finished the winter quarter with good grades, she opted out of taking classes during spring quarter because she wouldn’t have enough battery charge to sustain virtual learning. The situation became so serious that she considered dropping out of De Anza altogether.

“At the very beginning, I thought the pandemic would last for two or three weeks, but then it went on and on,” K.D. said. “It was quite indefinite.”

K.D. didn’t give up — she reached out to the county supervisor at the Cupertino office, who gave her the contact information for three community centers. She called all three centers for help and said she struggled to get them to take action.

“Some of the staff that I came across at the community centers were downright rude,” K.D. said. “They were not willing to help me, and I would say that they have no empathy for their clients.”

The Mountain View Community Center eventually referred her to Hope’s Corner, a nonprofit that serves the unhoused by providing them free meals. Citing her previous negative experiences with reaching out for help, K.D. said she didn’t expect much out of the call, but she tried anyway.

The first person K.D. spoke with was Leslie Carmichael, the president at Hope’s Corner during that time. K.D. was surprised when Carmichael started asking her specific questions, such as what the voltage was on her laptop.

“I was like, ‘Wow, this is a really different kind of conversation,’” K.D. said. “It’s like seeing the light when you’re going through an infinite dark tunnel.”

Carmichael listened to K.D.’s problem, and over the course of the next couple of weeks, she drew on the resources available to Hope’s Corner to put together a solution.

“I reached out to one of our board members, an attorney,” Carmichael said. “One of her clients was a company called Jackery, and they donated phone and laptop batteries to us that we could loan out and recharge for Kim.”

Carmichael told K.D. that she could come in on one of the two days that Hope’s Corner was open. K.D. made use of the service and called it a “relief.”

“I realized I just came across someone who is willing to help and cares enough to find out if there is a solution,” K.D. said. “That just blew me away.”

Still, K.D. was not able to return to De Anza, as she could not charge her laptop and phone often enough to maintain a five-day-a-week class schedule. Nevertheless, she thanked Hope’s Corner for helping her through a “dire” situation.

“It was like a lifejacket that they threw overboard for me,” K.D. said. “That kept me alive.”

Since De Anza opened its campus back up to students, K.D. has been able to charge her devices more frequently and get back to earning her certificate in web design. She still uses the portable charger that Hope’s Corner gave her, and she said she feels “lucky” to have gotten in contact with them.

“There’s a group of people at Hope’s Corner that really exemplifies what community service is all about,” K.D. said. “I have to stress that the staff there was very respectful, unlike the attitude with other organizations where they would look down on me.”

K.D.’s situation also inspired a new program at Hope’s Corner that supplies unhoused residents with the means to charge their devices. Carmichael reported that, so far, 691 people in total have benefitted from the program, both through Hope’s Corner and through other local organizations that received donations from Jackery.

“Community service is about trying to understand what needs there are and then working with people to find a way to address those needs,” Carmichael said. “It was just an example of Hope’s Corner’s ability to pivot and respond to a need, and I’m grateful that we could make that happen.”

“I was not the only one in that situation,” K.D. said. “There are more people like me who could be helped by the program, and it was all started because of the willingness to help and to listen.”