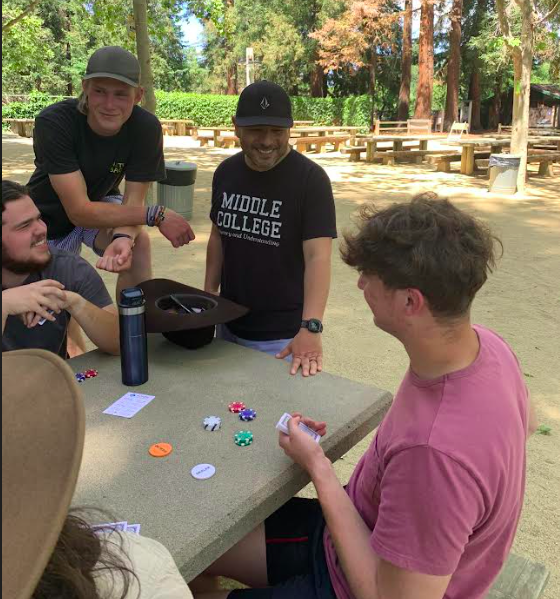 Marciano Gutierrez (wearing Middle College T-shirt) talks with his students at Cuesta Park in Mountain View during Community Park Day on May 19.

Marciano Gutierrez walks among the tables of students who are laughing, talking, and playing games. He hops in for a round of a card game, then moves on to converse with other students. Every Thursday, this scene repeats; it is Game Day at Middle College.

The program is split into two “cohorts” of about 50 students each, one called “Agency” and another called “Understanding”. Gutierrez is one of two teachers in the latter, where he teaches U.S. history to the juniors and a civics class to the seniors.

In the fall of 2020, Gutierrez joined the Foothill Middle College program, but his decision to go into teaching dates back much further.

He said that this formed his view on education and its importance, which helped him with motivation to do well in school. He saw his mom as a person “who desperately wanted to participate and be an independent person, but didn’t have the tools to do so.”

Staying true to his goal of doing well in school, Gutierrez scored highly on state tests, resulting in an invitation to transfer into a local magnet school called Computech.

Using the many resources made available by Computech, he then went on to study at the magnet high school.

Gutierrez said that he had a feeling that he wanted to be a teacher one day even before attending Computech.

He added that Mrs. Nadine Takeuchi, his second grade teacher, served as a major inspiration. “She had high standards,” Gutierrez said. “But she also made sure that I was taken care of as an individual, and I wanted to be someone like that.”

Gutierrez ended up going to California State University, Fresno for his undergraduate degree, earning a 4.0 GPA. He then earned his Master’s degree in education and teaching credentials at Stanford.

After graduating from Stanford, Gutierrez worked at the De Anza Middle College program and at Alta Vista High School for six years, but he said that he wanted to be more involved in the political aspect of education.

In order to do this, Gutierrez applied and was later accepted to a fellowship position at the Department of Education in Washington, D.C.

At the nation’s capital, Gutierrez worked as a ‘Teaching Ambassador.’ In that role, he sat in on Department of Education meetings and offered advice based on his own experience as a teacher.

After a year in the position, Gutierrez said that he wanted to get back to working directly with kids.

He returned to the Bay Area and worked at Alta Vista High School for seven years, before coming to the Foothill Middle College program.

As an alternative education program, there are several things that differentiate the Middle College program from traditional schooling. Among these differences is the smaller, tighter-knit community.

Kai Oppenheim, a junior at Middle College who joined the program because he wanted a more “integrated social experience,” said that because there are only 50 people in each grade at Middle College as opposed to a few hundred at a different high school.

“Everybody knows everybody here,” Oppenheim said.

Teachers at Middle College use the small class size to bond with their students.

Alicia Triana, an English teacher in the “Understanding” cohort who joined the Middle College program at the same time as Gutierrez, said that he “is curious about students and likes to talk to them about what interests them.”

According to Gutierrez, the small class sizes provide an opportunity to connect closely with his students and build meaningful relationships.

As well as developing connections with students, Gutierrez said that he likes to keep students engaged by teaching in a way that makes students think about perspectives they may not have considered before.

Gutierrez said that he wants his classroom “to be a place where voices that are sometimes hidden are made apparent.”

This can apply to teaching aspects of subjects that are both sometimes not shared or controversial.

“I lean into the very thorny issues,” Gutierrez said. “Not to tell you or try to convince you of what I believe, but so that students can speak on the topics and hear from one another.”

Gutierrez said that his role as a teacher is not just to produce the students with the best grades, but rather to get them to engage with his classes.

“I am with students for a few hours a day,” Gutierrez said. “I know that they have a ton of things that they are dealing with, whether that’s school, sports, parent dynamics, relationships. I want those two or three hours to be a time that a student can look forward to.”