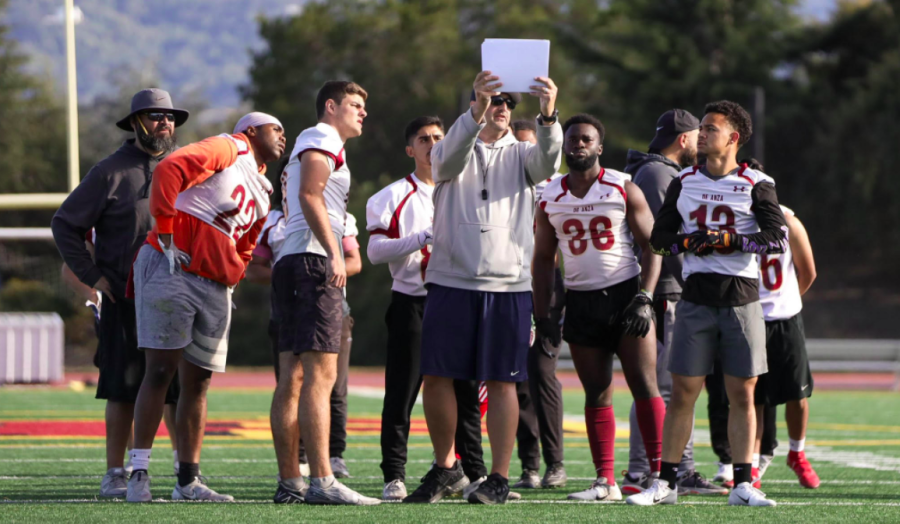 Coach D'Agostino outlines a play for a group of offensive players at spring practice.

7 a.m.- De Anza College’s new Head Football Coach Joe D’Agostino is woken up by his iPhone alarm. He gets a quick breakfast and heads to campus.

7:30 a.m.– He unlocks the door to the weight room and starts his daily workout by himself. After about an hour of hitting the weights, he heads to his office, where he turns on one of his monitors to SportsCenter and the other to Google Slides. He works on the agenda for the team meeting later in the afternoon and simultaneously watches highlights from last night’s Dodgers game.

11 a.m.– He takes his daily Zoom meetings with Athletic Director Ron Hannon to talk about fundraising and other administrative work he needs to get done for the day.

1 p.m.– Lunchtime. He’s narrowed his daily selection of lunch spots to Panda Express, Ike’s Sandwiches and Whole Foods which are all conveniently across the street from campus.

2:30 to 7 p.m.– D’Agostino is all football. Team meetings start at 4 and the players and coaches hit the field at 5 for Spring ball.

On the field, Coach D’Agostino is loud and demanding. He coaches with a fire that has been lit ever since he started playing football when in pop warner.

By the end of practice, that fire starts to cool. He jokes with his players and enjoys a laugh with his assistant coaches. Once the last ball is put in the equipment room, he rushes over to get into his car.

8 p.m.– D’Agostino is driving down Highway 101 going south. It’s Thursday, which means it is his last day in Cupertino for the week. His wife Nadia, along with their children Sofia (11) and Luca (7) wait patiently 184 miles and three hours away at their home in Hanford.

11:30 p.m.– D’Agostino walks into the door and is greeted by his wife and children. He asks how their week was and if anything interesting happened at school. To end the night, he tucks his kids in and hits the hay.

The type of dedication illustrates is not new to De Anza’s head football coach D’Agostino. He’s been a grinder his whole life. From working as a team manager for the Boston Celtics and Sacramento Kings to working his way up the coaching ladder at five different community colleges, he has always embraced the grind.

But even with his passion for football, he makes sure to find time to make sure his family and players are taken care of off the field as well. He wants to put W’s in the win-loss column, but he doesn’t lose sight of what his real job is: Molding his players into better men by using the experience on the field.

“I don’t care if we win games or not. That’s not what it’s about,” D’Agostino said. “It’s about the experience. If we do all those things correctly, then we should have pretty good outcomes. I’m going to focus on everything we can do with the experience.”

D’Agostino has been around football his whole life. He is a son of a high school football coach, and was always around the game whether it was playing for his local youth team or helping his dad set up cones on the field.

Out of high school, D’Agostino was good enough to receive a college scholarship to play at Fresno State University, but did not play a snap for the Bulldogs. During his freshman year of college, D’Agostino was diagnosed with Non-Hodgkin’s Lymphoma, a type of cancer that attacks the lymphatic system. He was ruled ineligible to play.

D’Agostino went into a dark place after receiving that news. He said that he had many lonely nights and was not prepared for his life in football to come to a close.

“It was a really, really difficult time in my life because everything changed,” D’Agostino said.

The one thing he loved to do more than anything was taken away from him in a blink of an eye.

But in that adversity, D’Agostino found more about himself than he had ever known. After he was cleared to play sports again, D’Agostino jumped right back into college athletics and accepted a scholarship to play collegiate water polo at the University of Massachusetts.

At UMass, D’Agostino was a member of the 1996 team that reached the NCAA National Championship. He would go on to graduate with a degree in sports management.

After college, D’Agostino didn’t really know what he wanted to do. He took a job in basketball operations with the Sacramento Kings where he would do odd jobs like handle equipment and help with the scouting department.

Around that same time, D’Agostino enrolled at Lincoln Law School in Sacramento where he wanted to pursue his law license. He had always dreamt of being a lawyer as a kid and finally got his opportunity to do so, but after just a couple of months, he realized that it was not in his future.

“I got into law school and I was miserable,” said D’Agostino.

After finishing law school, D’Agostino decided to pursue something he was really passionate about instead: Football.

To get the ball rolling, D’Agostino reconnected with an old coach of his from Fresno State and was recommended for a job at Reedley Community College in Reedley, California. From there, D’Agostino’s coaching career took off. He would bounce around the Central Valley, getting hired for different coaching positions while learning the game from some of the top coaches in the JUCO system.

He would eventually find a home at the College of Sequoias, accepting a role as their defensive coordinator in June of 2013. He would work his way up to becoming the program’s Head Coach in 2017 and had his best season in 2019, leading the Giants to a 6-5 record.

When D’Agostino was hired at De Anza College earlier this year, he said that it wasn’t a surprise. He knew that he had the work ethic and the resume to lead the Mountain Lions in the right direction.

That work ethic does not go unnoticed by his players and coaches. Many players, former and current, believe that D’Agostino sets the tone when it comes to working hard on the field.

“I don’t think the guy ever slept,” said Mason Ruiz, a former player and assistant coach of D’Agostino’s and the current defensive line coach at the College of Sequoias. “I witnessed Coach D do laundry, hang up the practice jerseys, break down and upload the film. He did a lot of those things where most schools probably have somebody already doing that, he didn’t mind doing it himself.”

He is an all-around coach and does not have a specific speciality on either side of the ball, but perhaps his greatest strength is his ability to shape his players into great athletes and great students. D’Agostino believes that building relationships with his players is his most important job as a football coach.

Building those kinds of relationships with players and coaches at De Anza has already started. Even though there is a new crop of players, many of the assistant coaches from last year’s team were retained. Coaches and players so far have been impressed with D’Agostino’s intensity and his hard working qualities.

“He’s a no-nonsense guy and he’s trying to lay down a foundation so we can be successful,” said Larry Jones, the offensive line coach at De Anza. “He’s doing a good job at executing this plan.”

“I just love his intensity and like the level of discipline he brings,” said sophomore linebacker Iretunde Akinsola. “I feel like he’s gonna take us to the next level.”

On top of being the head football coach this year, D’Agostino will also be the head advisor of the Football Academic Success Team (FAST). The program is designed to help freshman athletes get ahead in the classroom while also providing them with a resource for things off the field such as mental health.

“It’s really meant to develop and empower our student athletes to maximize their experience as a part of the football team,” said D’Agostino. “It’s not just a study hall. It’s really a wraparound service to empower our young men. To really navigate the college experience and find value in that experience outside of just football.”

The Mountain Lions will look to improve on last year’s season where they went 2-8. They are hoping D’Agostino will be the answer to getting De Anza back to their winning ways.

D’Agostino has a track-record of creating winning environments while developing NFL-level talents such as Sheldon Richardson, Robert Jackson and Steven Nelson. His ultimate goal, however, is to make sure his players can transfer and get the most out of their football experience.

“Our job is to prepare them to transfer and to finish that 100% of their football career, and then give them the ability to have a career as a result,” said D’Agostino.