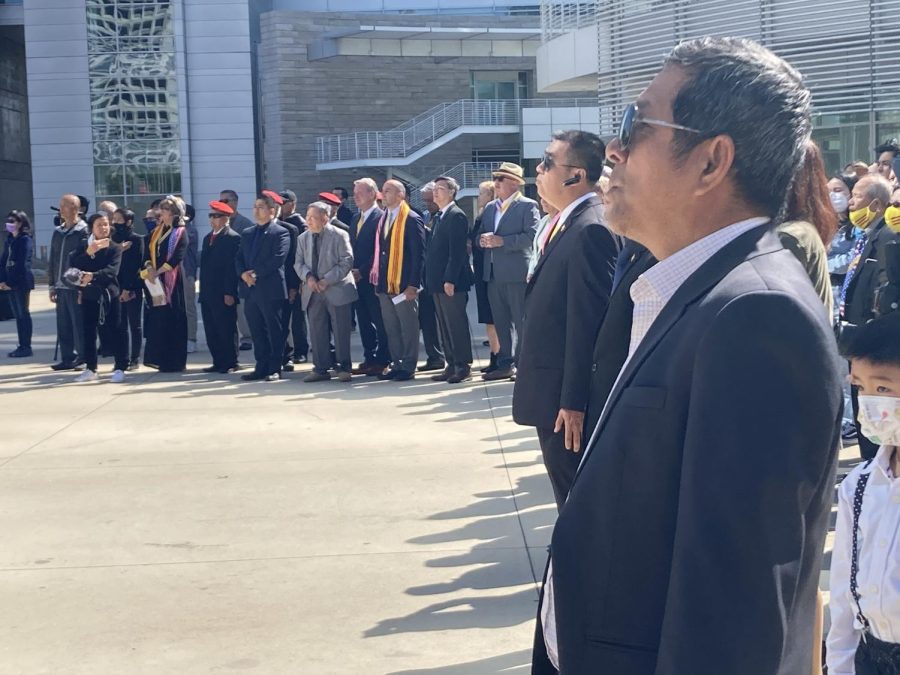 Members of the Vietnamese community and other attendees gather at San Jose City Hall to commemorate the 47th anniversary of the fall of Saigon.

Members of the Vietnamese and San Jose community gathered at San Jose City Hall on April 30 to commemorate the fall of Saigon in 1975, a date also known as “Black April.”

The event was organized by the Vietnamese American Roundtable (VAR), a community outreach organization created to educate and advocate for the Vietnamese community. This year’s commemoration was focused on the message of “care, compassion and community.”

Phillip Nguyen, VAR’s executive director, is the child of Vietnamese refugees who grew up in Southern California. He said he didn’t grow up around a lot of Vietnamese people, but it was through majoring in Asian American studies in college that he started learning more about his community and was able to educate others about it.

“There’s a lot of intergenerational trauma that exists in the Vietnamese-American community that we’re still trying to reconcile with and heal from,” Nguyen said. “For us in the second generation, finding a balance between understanding how the mainstream understands the Vietnam War and how our parents experienced it, is an important aspect.”

This was the first in-person Black April commemoration organized by VAR since the onset of the pandemic and it was held at two different locations. The first part took place at San Jose City Hall and it concluded at the Viet Museum in Kelley Park, where volunteers prepared meals for the guests and members paid tribute to fallen soldiers of the war by setting up an altar full of food.

At City Hall, there were several exhibits including the Vietnamese-American literature exhibit which provided attendees with a list of Vietnamese authors and book recommendations and the “Cơm Gia Đình” exhibit which displayed Vietnamese comfort dishes.

The Vietnam War lasted from 1955 to 1975, and the fall of Saigon marked the end of the long-standing conflict and the South Republic of Vietnam.

Jackeline Ho, a second-generation Vietnamese-American who attended the event, said that her parents were the first in her family to come to the United States. In spite of her parents’ firsthand experience escaping Vietnam after the war, she said that her family rarely talks about the events that brought them to this country.

She said events like this are nice for the older generations to come together and look back on their shared history and culture.

“It’s also important for younger generations to understand where we came from, how we came to the United States and listen to those stories,” Ho said. “I think commemorating our culture is a tradition that has been lost within the younger generations, so it’s really nice to have events like this and to see young faces all around.”

Dinh Tran, a Vietnamese refugee, volunteered at the event by setting up signs and flags of the former Republic of Vietnam. He said he left the city of Da Nang in central Vietnam when he was 18 years old by boat after living under a communist-ruled government for three years.

“I saw a large number of people die and that’s something not everybody thinks about,” Tran said. “Events like this are important for the refugee and Vietnamese community as it helps us remember the harm done during the Vietnam War.”

According to a 2015 Vietnamese Diaspora report by the Migration Policy Institute, more than 200,000 Vietnamese refugees were allowed in the United States between 1974 to 1977 and that number nearly doubled during the 35 years that followed until 2013. Currently, the city of San Jose has the largest population of Vietnamese people outside of Vietnam and Vietnamese is the second most spoken language other than English.

Louis Phan, a refugee and officer in the Republic of Vietnam army said that at the beginning of the war, he was a young university student studying law, but like many others in his generation, he had to leave his studies to fight in the conflict.

“That month, that day, was the saddest of my life,” Phan said. “After the war ended, I was put in a re-education camp for almost 10 years.”

San Jose mayor Sam Liccardo attended the event and shared his secondhand experience with the Vietnam War and how knowing about it allowed him to be more empathetic of the Vietnamese community and their struggles. He said he often thinks of a young Vietnamese classmate who joined his class a couple months after the fall of Saigon when he was just 6 years old.

“She spent several weeks crying every day with her head on the desk and none of us understood why,” Liccardo said. “We know that trauma has a tendency to make people very quiet about what they’ve experienced, and for that reason, it’s important that we have monuments like the Vietnamese Museum, so that the next generation will really understand the price for freedom that many have paid.”