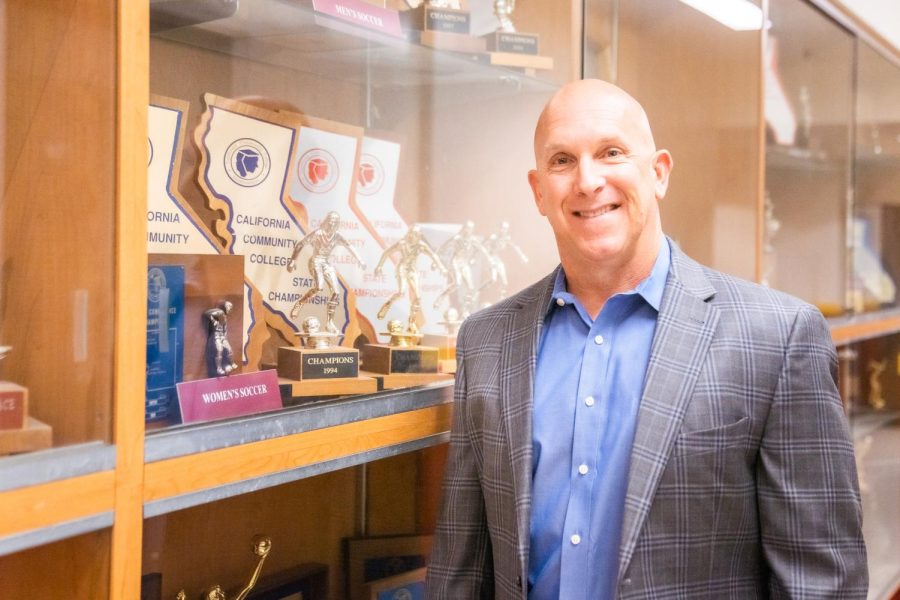 Ron Hannon has had a burning passion for sports for as long as he can remember.

“When I was younger, it didn’t matter if we were trying to win a conference championship or just racing to the water fountain,” Hannon said. “Competing and being a part of a team was all I cared about.”

Hannon was hired in March as Director of Athletics and Student Success. His duties are to oversee the operations of all sports programs at the college.

His father was a basketball coach at Pioneer High School in San Jose, and it was there where he passed down his love for the game of basketball.

Hannon would go on to play basketball at Gavilan College for two years before moving on to play Division 1 basketball at San Jose State. There, he said, was an experience that changed his life and one that he hopes to provide for current De Anza student athletes.

“That time was when the lightbulb really turned on for me,” Hannon said. “I had coaches that cared. They had a huge impact on my life and helped me find the trajectory of where I was going and helped me focus and follow through.”

During his time at San Jose State, Hannon built a friendship with current De Anza volleyball coach Dawnis Guevara who was also a student-athlete at the time. Guevara said she is excited that they are finally working at the same school together and that she has many fond memories of camaraderie back when the two were young athletes.

“He is an approachable, hardworking and genuine human being,” Guevara said. “Since arriving on campus, Ron has been cultivating trusting relationships within our department, as well as across the campus.”

Although he’s new to De Anza, Hannon is far from a new face in the California Community College athletic scene.

But the awards are not what motivate him.

“By far the thing I am most proud of from my time at Gavilan is assembling a highly qualified staff that genuinely cared about our athletes and students,” Hannon said. “We won championships, earned student athletes scholarships, but none of that is possible if you don’t have a quality staff in place.”

Hannon takes over for former Athletic Director Kulwant Singh who was with De Anza for 31 years. Hannon said that he became a good friend of Singh’s over the years and knew he was retiring before considering throwing his hat into the ring for the job.

“Sometimes word of mouth gets out, the job gets advertised and you start envisioning how you would look in that job,” Hannon said. “But now to be here and actually experience it, there are some incredibly talented and supportive people on this campus.”

Working as an athletic director for so long has allowed Hannon to make a smooth transition into his new job. This is because he was already heavily involved with the State Athletic Association which allowed him to make connections with community college professionals around the state including current De Anza Dean of Physical Education and Athletics Eric Mendoza, who said that his new colleague is off to a good start.

“He is passionate about improving student-athlete success and their experiences in all areas,” Mendoza said. “He comes to campus each day with a contagious energy and he’s always ready to produce results.”

In his first seven weeks on the job, the biggest adjustment Hannon said that he had to get used to was the amount of students. De Anza College has roughly 18,000 students while the number at Gavilan usually hovers around 5,000.

When it comes to leadership, Hannon said that he believes in a hands-off approach and letting his staff do their thing.

“I’m not a micromanager. I don’t think that’s an effective way to lead,” Hannon said. “The idea is to provide a vision of where you want the program to go and help things move forward.”

Hannon said that he has strong belief in the staff that is currently in place.

“Sometimes, the best thing I can do from a leadership standpoint is get out of the way,” Hannon said.

Casey Fleming is one of those colleagues who is working with him for the first time. He is the Men’s Water Polo coach and PE Teacher, and he said that Hannon has lived up to his own words.

“He’s only been here for a little over a month but I’m impressed with how much he’s gotten done,” said Fleming. “I love working under him and I’m excited for the future of De Anza.”

While Hannon is in an administrative role, he said that he likes to focus on the human side of things more.

“I’m a people person first,” Hannon said. “This is a great profession. You get to meet all sorts of people which is something I thoroughly enjoy.”