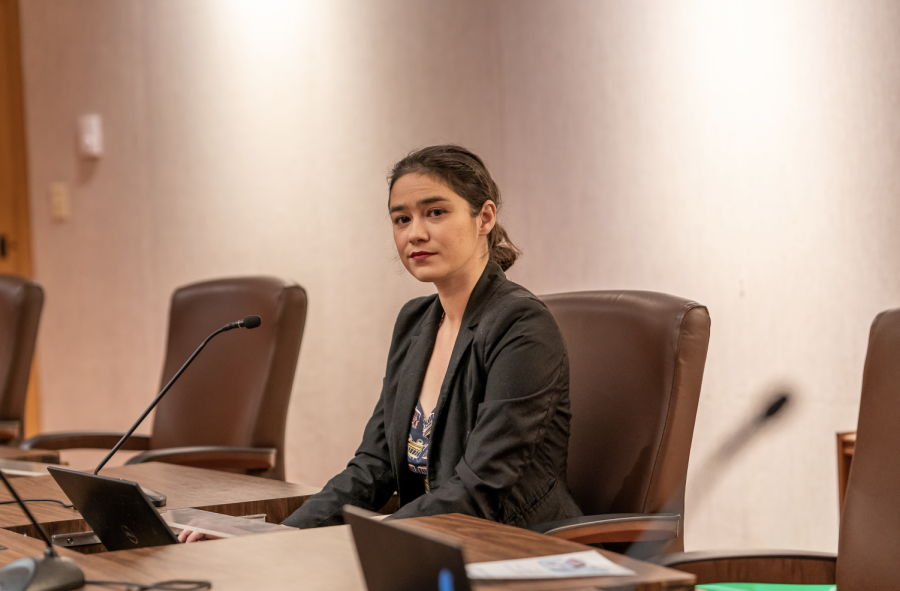 The city of Sunnyvale has found itself in the news a lot lately.

In addition to fighting off an invasion of crows (yes, crows), the city also made a bit of its own history in 2020 when it elected two council members that were unlike any that came before them.

One of them is Alysa Cisneros, who, elected at 33 years old, became the city’s first openly-queer and Latina politician. And in her decade-plus of experience in politics, she thought that she had seen it all.

That is, until a large flock of crows invaded her local neighborhood, cawed at the top of their lungs and pooped all over city benches.

“There are too many crows in downtown Sunnyvale, like thousands and thousands,” Cisneros said. “And my neighbors always tell me, ‘This is ridiculous, they’re a menace.’”

Cisneros asked the city to look into solutions for managing the crow problem. The study that came out of her request made several local news outlets and then gained

national attention through The Late Show with Stephen Colbert and The New York Times.

“The fact that this one little neighborhood issue captured national attention is very strange,” Cisneros said. “But that’s just one example of something that may not necessarily occur to you as a problem, but as a city council member and vice mayor, that’s what you deal with.”

Cisneros has lived in Sunnyvale her whole life. She was born in the Bay Area to her mother, a medical assistant at O’Connor Hospital, and her father, a janitor at Hewlett Packard Company. Over the course of her father’s 30 year career with the company, he eventually rose to become a global manager, transforming the family’s status from being barely able to live in California to solidly middle-class.

“I watched him go through the process of working, going to school and taking those promotions,” Cisneros said. “That opportunity allowed my siblings and I the chance to believe that we were going to succeed in life, obtain higher education and continue to live here.”

Cisneros also grew up in the wake of 9/11 and said that the “unrest, thought and dissension” surrounding the Bush years sparked her interest in politics as a teenager. Though she would go on to become an honors student in college, she said that was not the case during her high school years.

“Honestly, I was a pretty mediocre student,” Cisneros said. “I could have done better in my K-12 education, but I learned that doesn’t necessarily determine your success as a person.”

After high school, Cisneros worked several jobs in the political sphere. She started in community organizing focused on tenants’ rights and raising the minimum wage. However, with no college degree, she found that she had hit a ceiling and struggled to support her young daughter, whom she had at the age of 18. Drawing inspiration from her father’s own journey, Cisneros enrolled at De Anza College in 2011.

“De Anza set me up to transfer to a good school, continue working in community organizing and build my career simultaneously,” Cisneros said. “As a young single mother, it was affordable– I was able to work on campus and sustain that existence. I really credit De Anza with the extension of my career and the ability to make politics my job forever.”

In 2013, Cisneros transferred to Mills College in Oakland, where she would receive a bachelor’s degree in political, legal and economic analysis and a master’s degree in public policy. For five years after that, she went on to work as a public policy professional, collaborating with elected officials.

Then, in June 2020, her career took an unexpected turn when she was laid off. At that moment, she was starting to consider working in a more direct, public way.

“I hadn’t seen myself as somebody who’s going to hold elected office, so I thought about it quite a bit,” Cisneros said. “[Eventually] I said, ‘Yes, in the city of Sunnyvale, there are things I can do to make my neighbors’ lives measurably better, and this is a good position for me now in my life.’ So I went for it.”

Cisneros said that running a campaign during the pandemic was difficult, but at the end of it, she walked away with 55 percent of the vote, more than her two other opponents combined. By doing so, she broke barriers in representation and also became the first council member of  District 2 (downtown Sunnyvale) since the city switched away from at-large races.

She said that her first goal is to finish the downtown, which has been in redevelopment for a decade.

“It used to be an abandoned mall, but we’re building it out to be a community area that we envision as something we could be really proud of, and really a model for what we could do elsewhere in the city,” Cisneros said.

Her other policy goals include: improving public transportation, supporting small businesses and building sustainable, affordable housing to name just a few. She also said that she supported California Bill AB 1400, which proposed a state-wide, single-payer health care coverage system (that failed to pass by the date of this article’s publication). She is also working with her fellow council member Omar Din, the youngest person elected alongside her to the new council, to map out the scope of a possible pilot universal income program.

“I think it’s hugely important,” Din said. “A lot of studies show that most Americans could not afford a $500 or $600 fee out of nowhere. That alone would drive them into instability. We hope that this provides a cushion, especially for our most vulnerable residents, to live a life with dignity.”

Similarly to Cisneros, Din said that his outlook on politics is shaped by  growing up South Asian and Muslim following 9/11, a time in which he believes the government “failed” to protect and serve communities like his.

He thinks that the government needs more people from diverse backgrounds in order to give as many  people a seat at the table as possible.

Though they took different paths to the council, the two actually met five years ago at De Anza College. In Din’s first quarter there, Cisneros trained him how to organize communities at a leadership conference.

“I feel grateful to serve with Alysa because she really embodies that ethos of making sure your values align with your background,” Din said. “Whenever I find myself working on policies or initiatives I know are going to be controversial or difficult, Alysa never hesitates to support it, and vice versa.”

About a year into office, Cisneros was appointed unanimously by city council to a new position: vice mayor of Sunnyvale. Glenn Hendricks, a former vice mayor himself, nominated her for the position. He explained that the role is given to fresh council members to prepare them for greater responsibilities.

“It gives a person an opportunity to run a public meeting, which is very different when you’re doing it under a specific set of rules,” Hendricks said. “It’s different when you’ve got television cameras looking at you, and when everybody’s monitoring every step of what you do to make sure you don’t make any mistakes.”

“Aren’t you too young to be in politics?”

This is a question Cisneros has had to answer repeatedly when campaigning door-to-door or meeting constituents. At 34 years old, with over a decade of political experience under her belt, she laments that this sort of underestimation is a part of her reality compared to that of her male counterparts.

“One of the reasons why I went back and got my master’s degree was that I knew I needed twice as much credibility and twice as many formal accolades to get the same position as someone who was white or male would need to hold the same job or get paid the same as me,” Cisneros said. “So, when I talk to young people who want to get involved, especially people of color, I tell them to do it, but you have to find out who has your back and you have to develop a very thick skin.”

This drive to share with young people the lessons she’s learned led Cisneros back to the classroom where it all started. At De Anza College, she teaches “American Government and Politics” and “Grassroots Democracy: Social Movements Since the 1960s.” Professor Nicky Gonzalez Yuen, Cisneros’ former professor and current colleague, says that there is a lot of “shared experience” between them.

As a professor, Cisneros pays homage to the movements that have taken place throughout history as well as the ones that still exist today. In her own journey as a student, politician and mother, she recognizes the importance of teaching history inclusively and dynamically.

“I learned American history through the lens of struggle and the lived experiences of real people rather than through the lens of people who are powerful and rich enough to write (traditional) textbooks,” Cisneros said. “That inspired me to say, ‘I’m capable, just like these people, of getting involved and actually changing the tide.’”