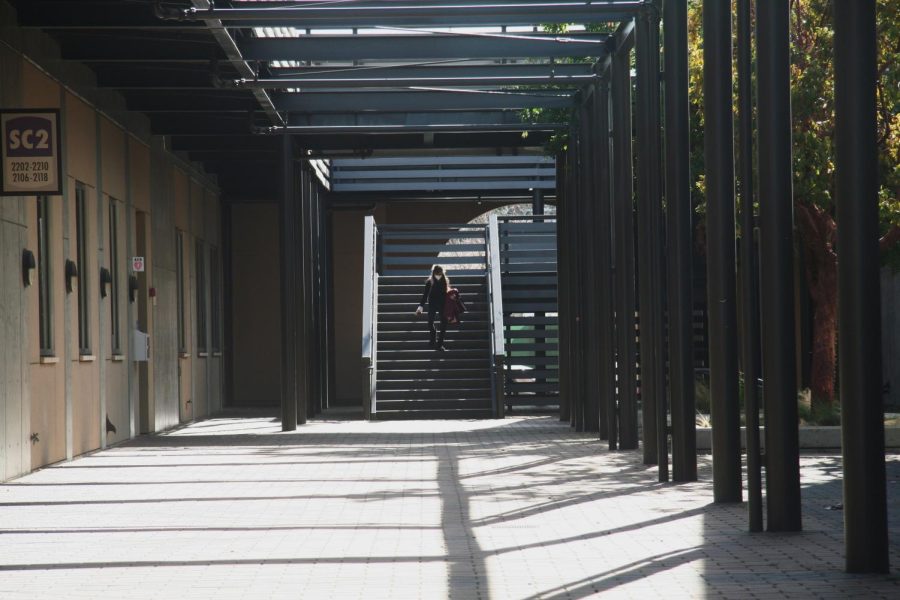 De Anza College was aiming to be at least 65 percent in-person by spring, but the recent omicron surge has added more uncertainty to the situation.

When De Anza President Lloyd Holmes said that he wanted the college to commit to an on-campus return by spring quarter 2022, students and staff alike were abuzz about their aspirations and hope for a return to relative normalcy.

Whatever progress was made in gradually shifting back to in-person classes quickly came to a head when the start of the current winter quarter coincided with the rapid spread of the omicron variant, leaving the De Anza community to scramble and readjust once again.

Holmes said he was impressed with how the De Anza community had handled the omicron surge and the unpredictability of the pandemic.

“I appreciate that our students have been so flexible and understanding, and I know that our faculty and staff have been unwavering in their commitment to students,” Holmes said. “Witnessing the engagement of students on campus is one of the parts of being president that I was most looking forward to–and fortunately, we’re continuing to work our way back to a more typical on-campus environment.”

When the number of positive cases began to explode after the holiday break, Tim Shively, an English professor and president of the faculty association, said that the body was thankful for the flexibility provided to those who had initially signed on to teach in-person to reverse course.

“A number of faculty took it upon themselves to switch to online, and there was this groundswell,” Shively said. “The chancellor was wise to listen to that and anticipate what is really needed here.”

While the majority of teachers reverted their classes back online to start the quarter, others chose to remain on campus. Janet Shaw, a humanities and dance professor, said that while much progress had been made since the fall, omicron quickly reversed much of it.

“This fall, no one told me they got COVID, including in my face-to-face courses,” Shaw said. “But this quarter, I’ve had people who either had their booster and weren’t feeling well or knew someone who tested positive.”

Ilan Glasman, a music professor who also chose to remain on campus, said that he feels safe in his classroom and that the college seems to be on top of things regarding handling the new variant. He said that it’s the fear more than anything that impacts how people, including him, view their surroundings.

“I have days that I feel very confident and that nothing can go wrong, and I have days that I go in saying ‘should we practice outside today?’ And there’s no real difference in anything in how I feel with the news, it’s just a hunch,” Glasman said. “That’s a tough way to deal.”

As much as he appreciates the flexible option to work from home, Glasman said that he is also worried about classes still getting cut due to enrollments falling below in-person class size minimums. He said that he understands that there are complications with funding, but that he wished the college would be more sympathetic during these times.

“I wish they would be more gentle with us during this pandemic, especially with the departments that are willing to go back face-to-face, I mean we’re taking a risk,” Glasman said. “We could have been online, but we chose to return face-to-face for our students and we don’t get any kind of leeway for that.”

Students are also experiencing mixed feelings about returning to campus. Hana Phiwreungnon, 20, environmental science major, decided to take an in-person yoga class this winter after the pandemic impacted her ability to go to the gym. She said that she struggled with online classes and that she’s looking forward to returning in person despite the new dangers posed by omicron.

“I think taking any physical education class in person is beneficial because the instruction is clearer and allows you to protect your body while strengthening it,” Phiwreungnon said. “And in general, in-person classes minimize how much self-teaching I have to do while giving me an easy way to socialize with other students.”

However, not all students are as happy with the return to campus. Jenny Trinh, 18, cognitive science major, said that she planned to complete her two years at De Anza virtually due to her preference for being online as well as concerns regarding the pandemic. She said that a pursuit of a return to on-campus education would be ill-advised during an ongoing pandemic.

“I believe classes should remain distant or hybrid learning. Even if COVID-19 becomes milder, it’s simply reckless to put students and their families at risk,” Trinh said. “I completely do not feel comfortable with going to school in person.”

Other students also have concerns regarding being in-person. On Jan. 26, a number of anonymous students banded together to voice their concerns about unsafe practices in their organic chemistry class at a student government senate meeting.

“It is extremely concerning that on the very first day we returned to school someone tested positive and our class got exposed,” a student said anonymously at the meeting. “Our teacher even got COVID (albeit post in person) even though he takes lots of precautions and double masks with medical-grade masks; if he isn’t protected, how are we supposed to be?”

Athletics have also confronted a turbulent return to campus with multiple interruptions already to start the quarter. Both men’s and women’s basketball teams had to reschedule their opening games in early January.

Elyzjah Gordon, 19, graphic design major, told La Voz in January that not only had the omicron surge impacted his personal life due to concerns for his family, but that practice and game cancellations would hamper him later.

“It has definitely affected my ability to go to practice and get ready for the season that is coming up in February,” Gordon said.

Shively said that it will be an uphill battle for the college when attempting to reinvigorate the shift to on-campus education after this surge.

“The struggle we’re going to face when we return  is persuading people that ultimately being face-to-face is the better thing,” Shively said. “Offering as much flexibility as we can show people in terms of allowing at least some of their load to be taught online or on a rotational basis will help us get there.”

De Anza’s policies and updates on its plan to return to campus can be found here.