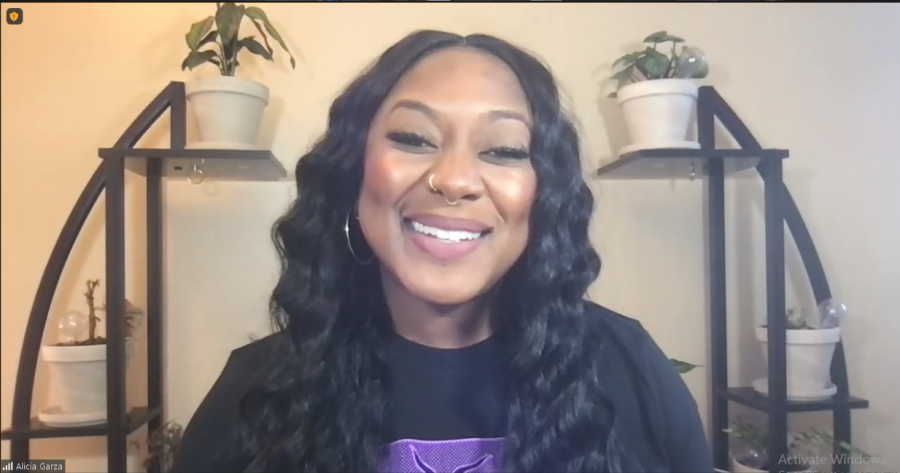 Alicia Garza, author of "The Purpose of Power" and co-creator of BLM, shared her journey of community organizing and talked candidly about her struggles.

On Oct. 28, author and Black Lives Matter co-founder Alicia Garza talked about the importance of community organizing and gave her opinion on in-campus police on De Anza’s “One Book, One College, One Community” panel where she was invited as a guest speaker.

De Anza’s “One Book, One College, One Community” is a college-wide reading project which aims to engage students in conversations surrounding this year’s project theme on racial justice and the crisis in democracy. This quarter, the “Purpose of Power” was featured as the book the school community read together.

In the panel, Garza began by talking about her ten-year journey of community organizing that started with Black Lives Matter, and the emotional rollercoaster she experienced throughout.

“While my work towards social change has been very rewarding, it’s also been deeply painful,” Garza said. “I’m a very private person, and over the last decade I’ve had to live a very public life that I did not ask for and I did not know how to navigate.”

Garza also talked about having to work 12 to 14 hours a day organizing and advancing her campaign, and shared some advice on what she learned throughout the process.

“We are doing this work because we want to change the dynamics of our society, our economy, and our political system which is deeply rigged and unfair. It’s not meant to be an easy job. It’s not meant to be fun, and it has definitely taught me to have tough skin and a soft heart,” Garza  said. “However, if you want to see the fruits of your labor, you have to be around for that and you can’t be around for it if you are completely depleted. So my advice to my younger self would have been ‘you are doing enough.’”

Garza also said that while her book started as a guide into community organizing, it slowly morphed into a sort of biography. She then commented on a recent topic of discussion at De Anza which was the role of in-campus police and how the militarization of campuses has been detrimental to a campuses’ sense of safety and dignity.

“When the only way that we know how to resolve problems is with guns and punishment, that’s a problem,” Garza said. “I don’t want to deny that bad things happen. But the issue here honestly, is that we are using tools for the most extreme cases when they happen the least often.”

Co-moderator and DASG Vice President Sarah Morales agreed that the militarization of police is an issue at De Anza.

“They’re putting a lot of resources and money into the police department that could be easily used on other student services like the library and tutoring services,” Morales said. “Yet, the only thing that they do is give parking tickets. It makes me wonder if having them is really that necessary.”

During the discussion, Garza added that “police don’t prevent crime; they only respond to it” and suggested that in order to solve problems institutions should engage in introspection and work on the reasons why these issues are happening in the first place.

Alicia Garza’s “The Purpose of Power” can be found on Amazon and Target for less than $20.