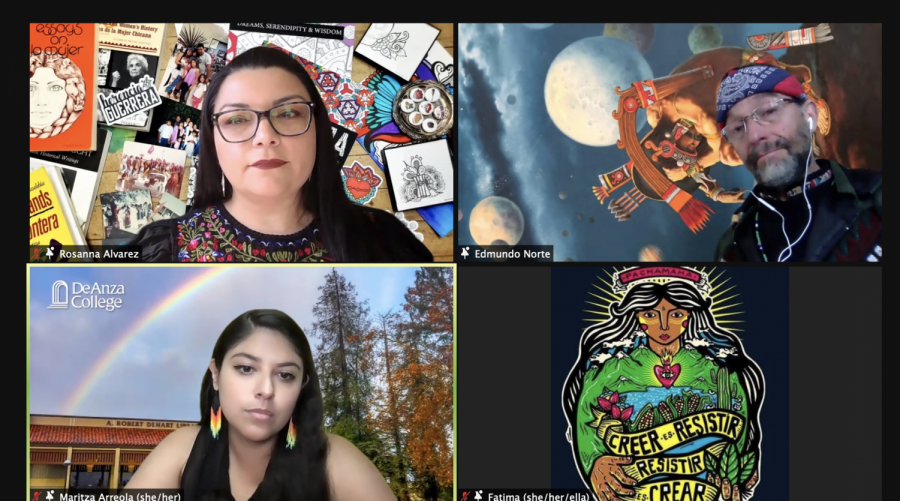 Chicanx and Latinx panelists urged the De Anza College community to dispel harmful stereotypes and set the record straight on a muddled history in the third installation of the panel series “Our Histories, Our Experiences, Our Lives: From Learning to Collective Action.”

The four speakers spanned generations. They shared their upbringings and reflected on their journey to reclaim a narrative that gets lost in discussions of immigration, labor and poverty.

Martiza Arreola, student activities specialist at De Anza, said she and her siblings are first-generation Mexican Americans and first in their family to hold college degrees. She said it was crucial to represent her diverse community.

“Latinx is not one race,” Arreola said. “There are White-Latin, Afro-Latin and Indigenous folks in every community. The issues that impact our community impact so many other communities, which puts us in a powerful position to show up for everybody.”

Rosanna Alvarez, a professor in women’s and Chicanx and Latinx studies, said it was important to reckon with Latinx history to move from learning to action.

“Critical self-reflection reminds us of an entire legacy of movements that go well beyond the 1960s,” Alvarez said. “It is compelling to understand what moves us in life and activate that knowledge in a way where we are doing right by the sacrifices of those before us.”

Panelists said that racism makes this self-actualization difficult to achieve.

Fatima Cervantes, 20, a biology major with a minor in ethnic studies, said she had to navigate this tension even within her own family.

“Racism has been internalized in our communities in the form of anti-Blackness and anti-Indigenous attitudes,” Cervantes said. “Because I have a darker complexion than the rest of my family, I grew up not feeling safe to speak up. I didn’t think I had a voice.”

Edmundo Norte, the dean of Intercultural and International Studies, added that racism diminishes the emotional well-being of marginalized people.

“Similar to how people will try to escape violence at all costs, being (racially) targeted can evoke the same feelings,” Norte said. “In an effort to stay safe, there has been a dehumanizing effort to cut ourselves off from the emotions and grief we feel when we see injustice.”

The recording of the event can be found here.