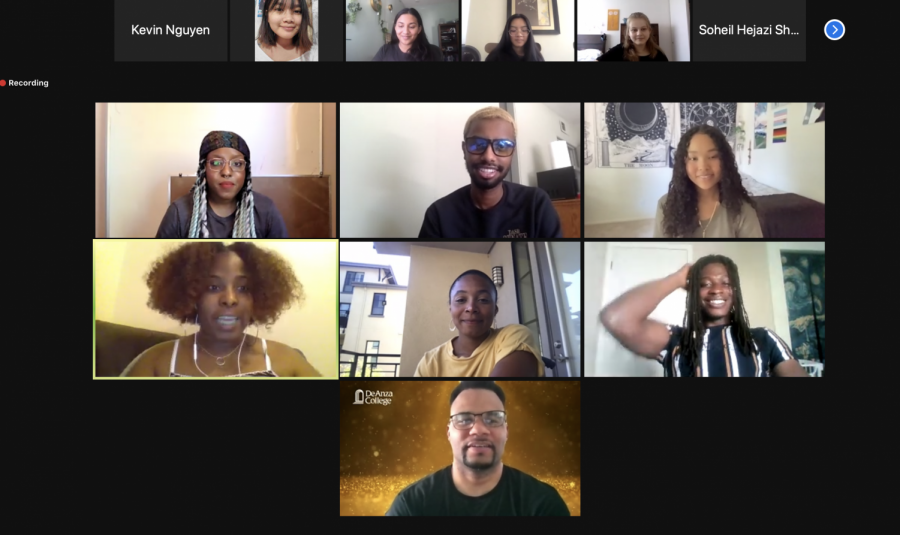 De Anza College students, alumni and faculty discussed anti-Blackness in the Bay Area in a panel with leaders of BLACK Outreach San Jose on June 4.

The event came off the heels of the death of Demetrius Stanley in San Jose, fatally shot outside of his home by plainclothes San Jose police officers a few days before.

Since the organization’s founding at the height of Black Lives Matter protests in the summer of 2020, Dimes and his colleagues have been pursuing Bay Area community causes and closely following city politics.

“The officials try to make it seem like there was no Antebellum South history here,” Dimes said. “We are not far removed from some of the most extreme forms of racism. My mother’s birth certificate classified her as ‘Negro.’”

De Anza student panelists also described moments they felt uncomfortable on campus because of their race.

“When I noticed police cars on campus, I would park as far away from them as possible,” said Justice Merriman, 20, sociology major. “Just to avoid them altogether.”

Merriman added that her teachers insufficiently understood the emotional impacts of racism.

“The current state of the world and the recent killings of Black people has really taken a toll on me,” Merriman said. “I wish more teachers were understanding of that and extended a hand, instead of me feeling like I have to bring it up out of the blue.”

Tamara Williams, who graduated from De Anza in 2020 and currently lives in Oregon, said she returned to echo many of the frustrations she described to La Voz last summer and to urge students to push for change.

“You need to keep this momentum flowing because the minute we stop, these injustices are going to continue to happen,” Williams said. “The only reason why De Anza is even paying attention now is because we’re making so much noise about it.”

“They’ve consistently told us how we don’t need more Black counselors because the (size of the) Black population of students doesn’t warrant it,” Wallis said. “But it’s kept that way by design, so that they can justify not including us at the table.”

You can join the table by participating in local politics, Dimes said.

“Find out who your city councilperson is, find out who your county supervisors are,” Dimes said. “Because we’ve collectively removed ourselves from local politics for so long, the only people that our leaders feel accountable to are big-money interest groups.”

Wallis said that everyone should fight anti-Blackness, not only Black people.

“Anti-Blackness is not just a Black-versus-White thing,” Wallis said. “We’re all involved in building the society that we want. It takes a village.”

“The power is here for all of us to take,” Dimes said. “We just have to start acting like the majority that we know we are.”