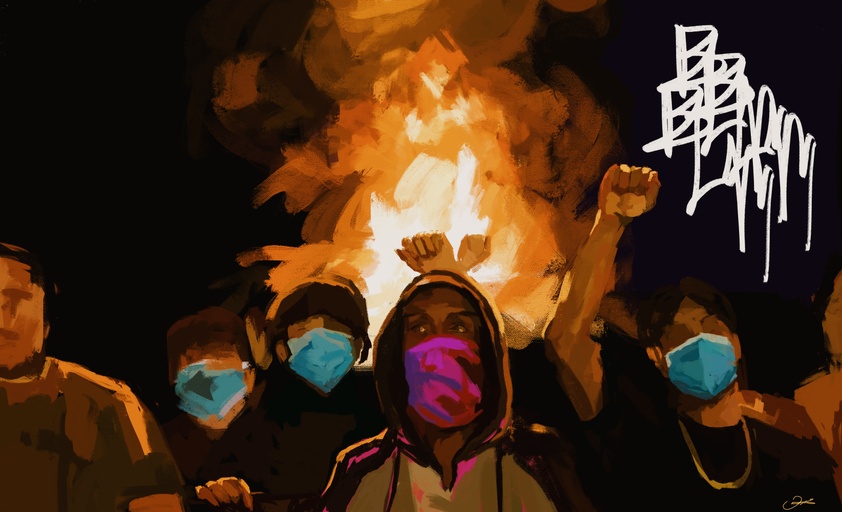 The pandemic has impacted De Anza College students from all walks of life, and artists and creative writers are no exception.

“It became less of a crisis of identity but just: what is there to do?” said Parayno-Stroll. “A lot of my poetry has turned to what are the things I still find beautiful and interesting.”

One of her paintings, “all i do is romanticize and decay,” symbolizes these themes with a striped circle inside of a square.

“A lot of people during the pandemic are super unmotivated and really lonely,” said Kazi.“The [circle in the square] is a symbol of isolation.”

Another of Kazi’s paintings, featured in the De Anza Euphrat Museum of Art, depicts how people of color are viewed differently when they wear masks.

“A lot of people perceived it as political activism, but I don’t think about my art that way,” said Kazi. “I like to leave it to interpretation.”

“It’s hard not to see people,” said Kaikkonen. “And that comes out in the writing.”

Kaikonnen’s work features an autobiographical perspective, reflecting the realities of living during COVID-19.

“My best stuff incorporates humor, but it deals with pretty dark stuff,” she said. “In some ways it can be depressing, but I feel like there’s a hope in there too.”

This hope carries into a wish to return to normalcy.

For writers like Kaikonnen and Parayno-Stroll, the pandemic has been about waiting for things to go back to the way they were.

“During the pandemic, it seems like all we’re doing is waiting for something to end,” said Parayno-Stoll. “I am waiting to stop waiting.”