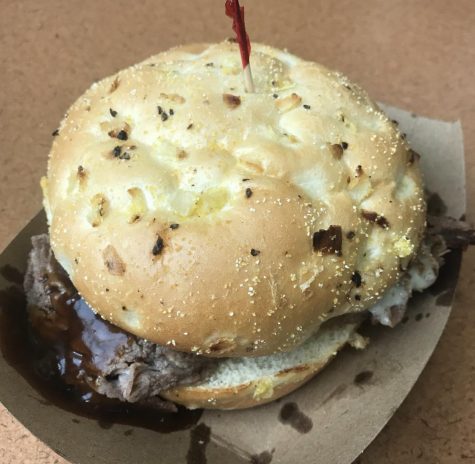 The Steakhouse Sandwich is as confusing as it appears and continues to dissappoint with its bland taste, messy presentation, and poor quality.

After waiting for my order for approximately ten to fifteen minutes, I was definitely sure that I would be presented with a beautifully crafted and original tasting burger. However after I sunk into my first bite, I can conclude that the wait is absolutely not worth it. If you are going to present me a burger with a lengthy wait time, you have to be cautious that the time balances with the quality of the final product.

It was a disappointment. The Steakhouse Sandwich was advertised as a burger comprised of shredded sirloin, caramelized onion, provolone cheese, and gravy on a black pepper bun. Parts of this composition can be misleading as the sirloin was not shredded and the type of gravy was not specificed. I was expecting a sloppy joe type of sandwich where the steak was shredded like pulled pork, but I was sadly mistaken.

I’m not sure why the caramelized onions and gravy were splattered all over the slab of steak like somebody had snotted on it, making the bun unexceptionally soggy. By the time I had held the burger up, the entire foundation of the black pepper bun had crumbled apart. When it became a chore to eat, I decidede I had had quite enough of its difficulties and ultimately gave up midway, until I realized I spent my hard earned money on it.

These major problems annihilate the entire presentation ultimately contributes to its bland taste. The steak was tasteless to the point where I felt I was eating hot bread. Even the provolone cheese was improperly melted with it being stretched to infinity after pulling on it.

If you have enough patience to try something new, you might have a different perspective than my bland experience. However, you should enter with expecctations low enough that you won’t be surprised of what a disappointment it is.